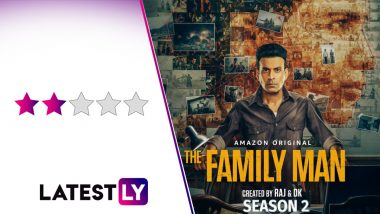 The Family Man Season 2 Review: In Raj and DK's The Family Man, we could have had our answer to internationally acclaimed shows like 24 (yes, I know there is an official remake) and Homeland. There is potential in both the writing and the treatment, there is the great Manoj Bajpayee doing an excellent lead work as an everyday man doing not so-layman job, and the blend of gritty fare with some effective black humour. Yet for all its positives, I felt the first season of The Family Man didn't make full use of its potential though it was a highly engaging show. Unfortunately, season 2 feels a dip down from the impact of the first despite flashes of brilliance. The Family Man Season 2: Review, Cast, Story, Streaming Date and Time of Manoj Bajpayee and Samantha Akkineni’s Series on Amazon Prime Video.

After the shocking turn of events that happened in the last episode of first season (not going spoil how it turns out here), Srikanth Tiwari (Manoj Bajpayee) has left TASC (Threat Analysis and Surveillance Cell) and is now working in an IT company. The reason to do so was two-fold. One, he wants to work on his marital problem, with his wife Suchi (Priyamani) becoming more and more distant from him.

Secondly, he was unhappy with how TASC handled the gas leak attack and passed it off as an 'accident'. Though his colleague and confidant JK (Sharib Hashmi) tries to convince him to return, Srikanth would rather try and fail to be the 'minimum guy' for his new boss (in a plotline straight out of The Incredibles and the chest-thumping straight from Wolf of Wall Street).

But just like Mr Incredible, can you chain Srikanth to a desk job? The opportunity to break the chain arrives when the PM of the country Basu (Seema Biswas) agrees to a certain demand of the Sri Lankan President, the disastrous consequence of which sees their upcoming meeting held in Chennai facing a terror threat by a few Tamil rebels.

The Tamil rebels, in turn, are instigated and supported by the surviving villains from the first season, Major Sameer (Darshan Kumar) and Sajid (Shahab Ali). Then there is Raji (Samantha Akkineni), a rebel fighter who is living incognito in Chennai, abused by the men around here, and waiting for the call for her bigger cause.

We all remember the furore that accompanied the release of The Family Man season 1, that continued to reverberate more in recent times, when Tandav caused even bigger outrage. Facing delays in its release, it was expected that the season 2 of The Family Man would be tempered down in its political nitpickings. Still, the trailer of the series managed to create more flutter, with its depiction of Tamil rebels, and appropriating them to terrorists. That accusation might continue even when the series is now out, but I would rather not talk about it considering the sensitivity of the matter.

But then how can this review happen without discussing the core theme that drives the new season? For one, I believe that right-wing hardliners, who were annoyed with the first season, might take it easy with the new one, that would now manage to upset a whole lot of other folks (including that seriously ill-timed epilogue stinger).

With much of its political stingers diluted down - even the whole Lankan rebel plotline never becomes anything more than a reason for going for the cliched 'PM is going to be assassinated' trope - The Family Man loses one major advantage that made it a watchout show. Of course, you can hardly blame the makers for playing it safer - for a so-called 'democracy', we see FIR's after FIR's being filed against creative voices, and Tandav even dragged Amazon Prime to court. But without that sharpness, The Family Man Season 2 does roar, but it feels more of a toothless bellow. There is a scene where Srikanth tells JK that no matter whoever is taking the high post of power or whatever that person's ideology is, they have to serve that post. Feels like the show is telling us something there. The Family Man Season 2: MP Vaiko Writes to Union I&B Minister for Ban on Manoj Bajpayee and Samantha Akkineni Series.

Still, there was plenty of promise in how the season began and reached its second act. Unlike some aspersions cast on the new season, The Family Man may have Srikanth deal with a new case, but it doesn't forget how the last season ended, and does solve the mystery of what happened at the gas factory. While that is cool and all, it still reminds us of how lazy an ending the first season had in trying to go for a cliffhanger conclusion. Luckily, at least the main storyline in the new season gets a proper ending, though it brings other problems of its own. The Family Man Season 1 Review: Manoj Bajpayee's Spy Series Rises Above Predictability With an Engaging Tale on Relevant Issues.

Like I said before, the season 2 does a good job of setting up the main conflict, introducing Raji's character (in the second episode) and keeps the proceedings livelier leading to a fantastic shootout sequence that happens in a police station. The said sequence is brilliantly shot and does a nice job of building up the tension, with a cracking score and some very long takes (which was also visible in the first season). The bantering between Srikanth and JK continues to be a highlight, the series takes digs at the usual racist tactics whenever Bollywood goes down South, and credit where due, I liked that non-Hindi characters converse with each other in their native language (with subtitles added for understandability).

Post the shootout sequence, however, The Family Man season 2 takes a dip. It gets occasionally gripping - the sequence of JK and his Tamil counterpart Muthu (Ravindra Vijay, a nice find) was brimming with tension - but mostly suffers from loose writing and not being able to do much with the characters.

Like for example, Raji. Samatha's inclusion in the new season had made her fans happier, and the actress does give a good account of what she was told to do. But if you expect Raji to create the same impact as Neeraj Madhav's Moosa did in the first season, you would be sorely disappointed.

Raji comes across more of a sympathetic figure, a tragic victim of Sri Lanka's military oppression, and also of the pervy male gaze in her new refuge. The scene where she narrated her ordeal with SL army before her 'Thalaiva' Bhaskaran (terrifically cast Mime Gopi) saved her is very disturbing and is nicely performed by the actress. But after that scene, Samantha gets little scope to perform as an actress, and that fact that she is merely restricted a single stoic expression steals the impact from both her performance and her character. Even the culmination of her character, that feel something taken from a videogame, is quite a letdown.

Even other characters and actors are hampered by lack of scope the screenplay provides them. Devadarshini's cop character Umayal enters the premise with a lot of promise, but disappears midway. A recurring character from the first season - whose identity I won't reveal for spoiler reasons but I can say it is played by an actor who got a lot of praise in another recent show - was hoped to be explored more in the new season, while it addresses the person's PTSD. Sadly, that arc comes abruptly to an end, without letting us feel anything for the person.

Also, in the first season, Srikanth and Suchi's marital woes helped in fleshing out his character, but here it becomes more like it is stealing attention from an already struggling main plotline. Sure, both of them get connected eventually courtesy their daughter Dhriti (Ashlesha Thakur), and I laugh everytime son Atharv (a scene-stealer Vedant Sinha) tries a new hobby without realising how bad he is, the track mostly passes muster, since it treads on beats that we have seen before. The whole ISIS track feels more of an addon here. Like the PM says to her secretary, why do you need to put ISIS in everything? Yes, why?

PS: The most interesting character I felt is the PM character. A Bengali woman, she bears a close semblance to a very popular real-life politician, who is making headlines these days, be it in her body language or in her stubborn attitude. Just mere coincidence?

- The Third Act Feels a Let Down

- Some of the Characters Feel Under-Written

The Family Man Season 2 shows flashes of brilliance with its direction, a well-shot action sequence and its performances. But those flashes don't lead to a thunderstorm that you expect the series to become, and that's a serious missed opportunity. Whether it was calculative restraint or plain average writing - who knows - but the new season feels a major letdown. All nine episodes of The Family Man S2 is streaming on Amazon Prime Video.

(The above story first appeared on LatestLY on Jun 03, 2021 11:59 PM IST. For more news and updates on politics, world, sports, entertainment and lifestyle, log on to our website latestly.com).