The Kapil Sharma Show: Sunil Grover Likely to Return As ‘Guthi’ on the Comedy Show?

Salman Khan, who happens to be the producer of Kapil Sharma's show, is trying to mend things between the two. Salman has been trying to make peace between them for a long time now and it is finally turning out to be positive. 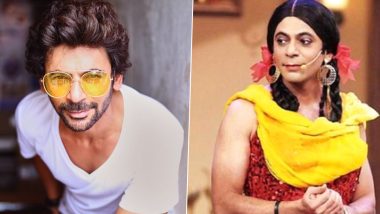 The Kapil Sharma Show is the longest-running reality show that people thoroughly enjoy. Kapil Sharma and his team including Sumona Chakravarti, Krushna Abhishek, Kiku Sharda, Bharti Singh have been entertaining the audience for many years. But while the characters created by these actors are loved by all, many wish to see Sunil Grover back on the show. His character 'Guthi' was one of the most popular characters on the show and ever since the actor called it quits, people have been wondering if he will ever come back. Sunil Grover Blasts Troll for Comparing His Upcoming Show Kanpur Wale Khuranas With Kapil Sharma’s.

Kapil and Sunil have had some personal tiff due to which the actor decided to exit the show and he never came back. His return was a major discussion in the news and while many a times it was said that he will return back on The Kapil Sharma Show, he expressed that he has said goodbye to the show for good. But it looks like the actor has had a change of heart and he is likely to come back on the show. Sunil is reportedly returning as 'Guthi' on Kapil's show.

As per the latest report in Koimoi.com, Salman Khan, who happens to be the producer of Kapil Sharma's show, is trying to mend things between the two. Salman has been trying to make peace between them for a long time now and it is finally turning out to be positive. Not only this, a few days ago we even saw Kapil Sharma's makeup man sharing a picture with Sunil on his Instagram handle, which may be a hint at him coming back on the show. The makers have not given a confirmation about the same but if the reports turn out to be true, then the fans will be in for great fun and the show's TRPs will definitely reach to next level.

Earlier when Sunil made an exit from the show, Kapil in an interview said, "All I can say is, he (Sunil) should have never left our show, we were all part of the success of our show. Sunil has been around trying to find his bearings in the entertainment industry. He's my senior. I've got the highest regard for his talents. And I am not the kind to feel threatened or competitive about anyone. In fact, I go out of my way to ensure every member of my team has a chance to take the stage, so I can relax. Sunil must have been provoked into leaving by people around him." Kapil Sharma Wishes Sunil Grover 'Lots Of Love' On His Birthday!

Kapil did an AMA session on Twitter back in Jan requesting his fans to ask anything they would want to know. He then broke the news of the show going off-air. He admitted that the show is taking a break. He revealed that his wife and he are ready to welcome their second baby together and hence he wants to focus only on that currently.

(The above story first appeared on LatestLY on Feb 17, 2021 02:21 PM IST. For more news and updates on politics, world, sports, entertainment and lifestyle, log on to our website latestly.com).