The Mandalorian Season 2 Finale: Twitterati Moved to Tears With the Epic Final Episode That Changes a Lot in the Star Wars Universe

Many Twitter users said that the finale not only left them crying but also hopeful for what comes next. We have collecetd some of the best reactions to the episode of The Mandalorian seaoson 2. Also, some major things were changed in the finale. 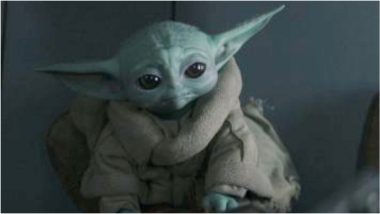 The finale episode of The Mandalorian season 2 started streaming today on Disney+. Star Wars fans are ecstatic. Many Twitter users said that the finale not only left them crying but also hopeful for what comes next. We have collecetd some of the best reactions to the episode of The Mandalorian seaoson 2. Also, some major things were changed in the finale. Things that many of you would consider SPOILERS, even if many of us saw them coming from miles away. So, in everyone's benefit, a SPOILER ALERT has been put in place. Proceed with caution. The Mandalorian Season 2: Ahsoka Tano Finally Makes Her Live-Action Debut Leaving Star Wars Fans Jubilant; Know More About The Character Played By Rosario Dawson.

The Mandalorian season 2 not only willl give way to new Star Wars series that are on the way, but also paid an ode to the legacy of what the franchise entails. One particular character made a stellar return in the final minutes. Also, one beloved character bid adiue. The Mandalorian Season 2: Pedro Pascal Opens Up on How He Re-Lived His Childhood With Disney+ Hotstar Show.

The @themandalorian finale of Season 2 was fantastic today. No spoilers, but if you haven't seen it yet, please watch through the credits, as there is a post-credit scene.

If you haven't watched any of this epic show, you should, it is superb.

It Will Make You Cry

I legitimately started to cry multiple times during The Mandalorian season 2 finale. That show has been one of the only good things about 2020.

Me after watching the season finale of #TheMandalorian pic.twitter.com/UDFUCbNhYL

#TheMandalorian finale is everything we all wanted & more. It is the beauty & power of #StarWars packaged in the form of a tense, action-packed rescue mission that ends w/ such an emotional punch that it left me in tears. It manages to touch every part of STAR WARS. Brilliant. pic.twitter.com/aZr9CnHdcc

1) Some really creative directorial and music choices that I loved.

4) Several scenes with female-only characters that felt completely organic and natural. This is how you do it. 👍🏻 pic.twitter.com/AfOiziENyB

S2 finale of #TheMandalorian.....SO FREAKING GOOD ! We need to about their CGI work.....amazing recreation of young Luke Skywalker/Mark Hamill 👏🏻 ! I knew he would be the one that found Baby Yoda 😍! Who else was crying when Baby Yoda and Mando were saying their goodbyes 🙋🏻‍♀️🤧?! pic.twitter.com/knAzJm6WVQ

Photos of @HannahRaeside and I reacting live to the season finale of #TheMandalorian pic.twitter.com/xn0PpE8kGV

Recently, Disney+ announced that 10 new Star Wars series will be launched on the streamer in the near future. So, not just The Mandalorian season 3, you can also look forward to titles like, Andor, Obi-Wan Kenobi, The Acolyte, Lando, Ahsoka, Rangers of the New Republic, The Book of Boba Fett, The Bad Batch.

(The above story first appeared on LatestLY on Dec 18, 2020 10:18 PM IST. For more news and updates on politics, world, sports, entertainment and lifestyle, log on to our website latestly.com).