The first season of Unpaused on Amazon Prime tried to talk about the positive sides of being in a lockdown while Unpaused Naya Safar captures the pain, agony and loss of COVID-19 we all have felt. The series stars Nagraj Manjule, Geetanjali Kulkarni, Saqeeb Saleem and others. 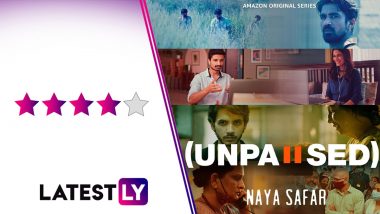 Unpaused Naya Safar review: The first season of Amazon Prime's anthology series focused on how lockdowns impacted everyone from people in the high-rises to the ones who walked home on foot. While it tried to keep it light and positive, it didn't really capture the essence of the pandemic. The second season more than just compensates for that shortcoming. This is perhaps the best Indian anthology series on COVID-19 and its effects on the internet today. Unpaused Movie Review: Saiyami Kher-Gulshan Devaiah's Love Story And Abhishek Banerjee-Geetika Vidya Ohlyan's Migrant Woes Are The Highlights Of This Predictable Anthology On Lockdown Life.

The first short is called The Couple directed by Nupur Asthana. The story is about a couple in Mumbai who are working from home due to the situation and then one of them gets fired from the job. It creates ripples in their relationship. The best bit about this short is it uses a predictable premise and turns it into something that all can relate to.

The next one is called War Room, directed by Ayappa KM and is perhaps the only short that ever took us into the place where a handful of people are slogging day and night to make beds available for patients. But life always creeps up in such situations. It is a beautiful narration on what happens when you have to decide between your duty and your grudge. What's fascinating about this short is it very simply puts the situation out there for people to decide whether what a call executive did is right or wrong. Taking sides is impossible here, mind you!

Teen Tigada by Ruchir Arun isn't as outstanding as some of the others on the list but on its own, this film does give you reasons to think. Three men from different areas of India take up a job to earn money after the lockdowns leave them cash-strapped. But the second wave lead to them get stuck in an abandoned factory with products they were supposed to deliver. How these three men bond over literally nothing is the concept behind this short. While two of them are stuck and want to go back home, one is happy he is not alone any longer. OTT Releases of the Week: How I Met Your Father on Disney+ Hotstar, Unpaused – Naya Safar on Amazon Prime Video, 36 Farmhouse on ZEE5 and More.

Next comes Gond Ke Laddu, directed by Shikha Makan. It attempts to include the sentiment of 'Maa ke haath ke laddu' in the mix but doesn't quite get there. The story is about an elderly woman who makes the laddus and couriers them to her daughter who recently had a baby. A delivery guy is supposed to get to the destination with the parcel on time but an accident leaves him hurt and the sweets crushed. The problem here is Makan tried to fit in so many narratives that the essence is lost. Also, the solution seems a bit far-fetched and too convenient. This is probably the weakest short in the series.

And here comes the winner, Nagraj Manjule's Vaikunth. According to Indian mythology, Vaikunth is where Lord Vishnu resides but here, it's the name of the burial ground for COVID victims. The director plays the lead character of Vikas Chavan who works at the site and is quite nonchalant about it after witnessing so many deaths. Manjule as the lead does a fantastic job of being a character least affected by the deaths around him but that nonchalance starts affecting you. Also the fact that despite doing a huge service to mankind, his house owner kicks him out. He then moves to Vaikunth and now with him, his son also witnesses these deaths while also waiting for his grandfather to return from the hospital after he tested positive. The ending of this short is everything we wanted, wished, prayed and begged during these times.

Performances are extremely satisfying with Manjule taking the winner's hat. Shreya Dhanwanthary and Priyanshu Painyuli team up to be the perfect urban couple, Saqib Saleem, Ashish Verma and others do their job well. Geetanjali Kulkarni is one other actor who stands out in the War Room short. What an amazing performance!

-Convenient approach for the above short

Unpaused Naya Safar is a must for everyone as we all have been through a lot recently. It also teaches us one fundamental thing about COVID - it doesn't discriminate like humans do! Unpaused Naya Safar streams on Amazon Prime Video.

(The above story first appeared on LatestLY on Jan 21, 2022 12:03 AM IST. For more news and updates on politics, world, sports, entertainment and lifestyle, log on to our website latestly.com).