Vishal Kotian on Jeena Zaroori Hai: It Might Be Sidharth Shukla’s Last Work, But He’s Immortal

Sidharth's stint in Bigg Boss gave him a huge fan base. His chemistry with Shehnaaz Gill was loved by the fans post Bigg Boss 13. Big Boss 15 contestant Vishal Kotian who is a part of this song gets emotional. 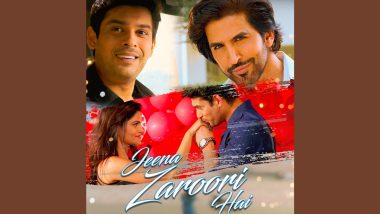 Sidharth's stint in Bigg Boss gave him a huge fan base. His chemistry with Shehnaaz Gill was loved by the fans post Bigg Boss 13. Big Boss 15 contestant Vishal Kotian who is a part of this song gets emotional and says: "Sidharth was not just a co-actor to me in this video, he has been a close friend to me for two decades. 'Jeena Zaroori Hai' is a beautiful love story where Sidharth and I play brothers in this song. We shot this song in the year 2019." Sidharth Shukla Fans Remember the Late Actor as His Character Shiv in Balika Vadhu Clocks 10 Years.

"Post that Sidharth went to 'BB' and the producers were supposed to release it post him coming out of the house, but then Covid stuck all of a sudden. When we were looking for a date to release, we heard the most tragic incident of Sidharth bhai passing away. I was numb, I couldn't even believe it had happened." Shehnaaz Gill Hits Back at Trollers Who Criticised Her For Dancing at Party, Months After Sidharth Shukla’s Death.

He further adds: "The producers did not want to release the video immediately after the demise for sentimental reasons as it's very relatable to the video. They finally decided to release the song today. I am happy it has been released as the fans will get to see Sidharth Shukla one last time. This is his last work. I would like the fans to watch the biggest icon of television one last time and give all their love. This video will make them cry. I have been emotional every single time I have watched it."

(The above story first appeared on LatestLY on May 20, 2022 05:56 PM IST. For more news and updates on politics, world, sports, entertainment and lifestyle, log on to our website latestly.com).