Without Remorse Mid-Credit Scene Explained: How the Epilogue Sets Up the Next Film in Michael B Jordan’s Action Franchise!

Without Remorse ends with Kelly wearing a new identity that of John Clark and goes. However, later, the mid-credit scene pops which sets up a massive sequel - a movie based on Rainbow Six. Read on. 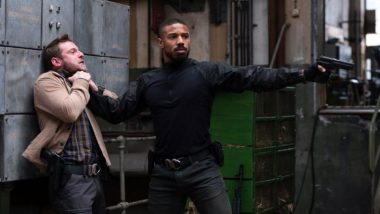 The latest film on Amazon Prime Video which has become the talk of the town is Without Remorse. This actioner stars Michael B Jordan (John Kelly) in the lead. Despite having a terrific performer like Jordan, the movie has been receiving lukewarm response from the critics. Infused with loads of fighting scenes, Michael plays the role of an elite Navy SEAL who is on a mission to avenge the people behind his pregnant wife's murder.  However, the highlight of the tragic love story surely is the ending, courtesy of the mid-credit scene. Without Remorse Movie Review: Michael B Jordan Turns Berserker in This Tepid Thriller (LatestLY Exclusive).

Now, if you've seen the film, we all know that John at the end finds the culprit who has killed her wife. But even though the mystery is solved, we see situations that lead to John in disguise, with the authorities believing that he is dead. And that's how the film ends with Kelly wearing a new identity that of John Clark and goes on the run. However, later, the mid-credit scene pops which sets up a massive sequel - a movie based on Rainbow Six. Yus, that's right! Without Remorse: Michael B Jordan Reveals Why He Wanted To Incorporate Chess in His New Film.

So the mid-credit scene takes place one year later. And we see Kelly in Washington DC, reuniting with his old mate Robert Ritter (Jamie Bell) wherein he tells him that he is planning to create a special team of agents from all over the world to defeat the terrorists.

But, the wow moment comes in when Kelly reveals the team's codename as Rainbow. Now, Tom Clancy and video game fans will connect the dots and know that this is kind of an announcement of Rainbow Six. Stay tuned!

(The above story first appeared on LatestLY on May 03, 2021 03:58 PM IST. For more news and updates on politics, world, sports, entertainment and lifestyle, log on to our website latestly.com).