Today’s episode starts with Lisa asking Naira (Shivangi Joshi) where was she till now and that the stranger was waiting for her and tells about the bond which Kairav and he shares as if they are real father and son. Check out the entire update here. 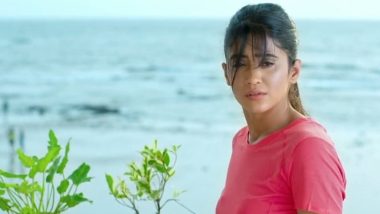 In yesterday’s episode of Yeh Rishta Kya Kehlata Hai we saw Naira is reluctant to approach Kartik while Kairav spends some pleasant time with him. Later, she apologizes to Kairav while Kartik takes an odd decision. Today’s episode starts with Lisa asking Naira (Shivangi Joshi) where was she till now and that the stranger was waiting for her and tells about the bond which Kairav and he shares as if they are real father and son. Lisa tells Naira to call once the stranger as he wanted to talk with her.

Next day morning, Naira dreams that she went to meet Kartik (Mohsin Khan) and reveals about their son but Kartik tells them to go away. Naira gets up from her sleep and is confused about whether she should go or not to meet Kartik.

On the other side, Kartik gets up and see’s no message from Kairav mother and thinks how silly that lady is she has not even messaged him once. Meanwhile in the Goenka’s house, Swarna and Manish discusses Naira and how they miss her not being in their life. Swarna tells that she feels Naira is still alive.

Meanwhile, Kartik and Suhasini are getting ready to leave for Udaipur. Their Naira is having breakfast with Kairav and tells him that he has to go to school and then he can talk with his father afterward.

Kartik messages Naira and tells sorry as he did not want to upset her but just wanted to meet Kairav and that he is leaving back to Udaipur but will miss Kairav as he is a very nice child and tells whenever they need him, she just has to call him and he will come. Naira after reading the message thinks she cannot be so selfish and keep Kairav away from Kartik. Naira takes Kairav along with her to meet Kartik at the hotel. Naira goes inside the hotel desk and asks in the reception for Kartik Goenka, the receptionist tell that they just left the hotel. Naira gets distraught as she was not able to make Kartik meet his son or see him.

On the other side, when Vedika and Kartik are going towards the airport, Vedika gets a call from the organizer that some formalities are to be done and she has to come for it. Kartik tells that he will do all the formalities and return back and tells them both to go to Udaipur. Kartik is happy as he will get one more chance to meet Kairav. In the precap, Akhilesh sees Naira and is shocked to see her alive.

(The above story first appeared on LatestLY on Jul 05, 2019 06:41 PM IST. For more news and updates on politics, world, sports, entertainment and lifestyle, log on to our website latestly.com).