In the latest picture, we do not see their faces but the emotions of love in it, totally stand out. 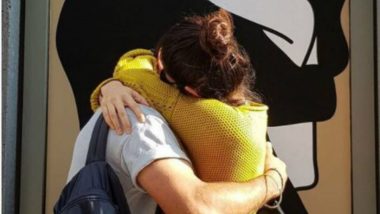 Looks like Virat Kohli and Anushka Sharma are falling in love every day after their marriage. The couple was never hush-hush about their affair and post marriage their display of affection is just out in public. Sure making the fans going awwww! In a new picture posted by Virat Kohli on Instagram, we see him and Anushka hugging each other very tightly and in the background, there is a similar painting. Virat captions it with 'My one and only.'

The cricketer just recently even attributed his success in the ODI series against South Africa to his loving wife. Virat has been overt about his feelings much more now. After winning the series, he thanked Anushka for her constant support. Anushka Sharma too has been cheering for her husband. After Virat completed a century, she had posted a story on Instagram stating 'What a guy!' After Pari's trailer was released, Virat too had appreciated his one and only's transformation. Virat Kohli Shares the Teaser of ‘Pari’ on Facebook, Reminds Wife Anushka Sharma’s Upcoming Movie is not a Fairytale

So the two have been consistently complimenting each others' work. In the latest picture, we do not see their faces but the emotions of love in it, totally stand out. They look adorable as they hug each other. The painting in the background shows a couple kissing and a small heart over it. Looks like, Virat and Anushka too couldn't resist the love while they were here.

While Virat Kohli remains busy with the South African tour, Anushka is busy with her upcoming film Pari which releases soon.  Looks like amidst all the distance between them, they keep their love blossoming in the social media sphere. We can sense the missing happening! The couple is indeed proving to be a 'Relationship Goals' couple. Fans are obviously delighted to see this love blooming over and over again. It is two months since their marriage on December 11, 2017, and they are sure growing in love every day.

(The above story first appeared on LatestLY on Feb 20, 2018 02:34 PM IST. For more news and updates on politics, world, sports, entertainment and lifestyle, log on to our website latestly.com).