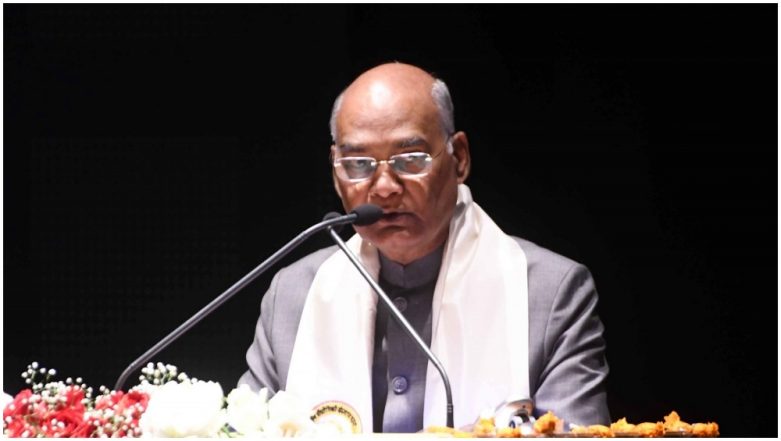 New Delhi, November 26: President Ram Nath Kovind said on Monday that "horrific images" of the November 26, 2008 Mumbai terror attacks still remain in India's collective memory and "we are honour bound" to get justice for those who suffered. Kovind, who was speaking at the inaugural function of 'Constitution Day Celebrations' held here, shared the concern of other dignitaries who spoke about the challenges posed by terror attacks like the Mumbai's 26/11.

"I refer to the terror attacks in Mumbai on this day, exactly 10 years later. Those horrific images still remain in India's collective memory. As a nation and the people, we are honour bound to get justice for the individuals and families that suffered," Kovind said. He made these comments after the second senior most judge of the Supreme Court, Justice Madan B Lokur, Union Law Minister Ravi Shankar Prasad and Supreme Court Bar Association (SCBA) president Vikas Singh made reference to the 10th anniversary of the dastardly attack in which a large number of people had lost their lives. Kartarpur Corridor: President Ram Nath Kovind, Punjab CM Captain Amarinder Singh to Lay Foundation Stone on November 26.

Justice Lokur, in his speech, said that the country had faced a huge challenge posed by terrorists on November 26, 2008 when "unusually large number of men, women and children in the financial capital of the country became victims of a senseless terror attack in which more than 250 people lost their lives". "Even today, such challenges are thrust upon us by some forces and we must continue to be vigilant to face then unitedly. The integrity of our constitution must be of foremost concern for us and we must remember that together we can meet any challenge," he said.

"Terrorists claim human rights since our Constitution provides it but what about the human rights of victims of terror attacks? It is something which we need to discuss and ponder about," Prasad said. SCBA president Vikas Singh said there was need to have a law to "outsmart the terrorists" by ensuring that by legislation, media is restrained from publishing the names of organisation and perpetrators of terror attacks because the whole purpose such an attack is to gain publicity.

In one of the most horrific terrorist attacks in the country's history, 166 people were killed and over 300 were injured as 10 heavily-armed terrorists from Pakistan created mayhem in Mumbai on November 26, 2008. The lone surviving terrorist - Ajmal Amir Kasab - was apprehended by the security forces and he was subsequently put to trial. His conviction and death sentence was upheld by the Supreme Court after which he was hanged on November 21, 2012.