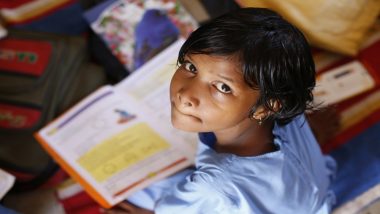 Kerala, September 7:  A report on education released by the National Statistical Office (NSO) has revealed that Kerala has topped as the most literate state at 96.2 percent. It was followed by Delhi at 89 percent.  Assam and Uttarakhand shared the top four positions with 85.9 percent and 87.6 percent, respectively.

The report mentioned that Andhra Pradesh’s rate of 66.4 percent is the worst among all states in India and significantly lower than Bihar’s 70.9 percent. On, the other hand, Assam's literacy level is at 85.9 percent in comparison to Karnataka's 77.2 percent. Family Literacy Week 2020: Theme and Significance of the Day to Improve Reading and Writing Skills of Whole Family.

Telangana’s literacy rate is 72.8 percent, which worse than the national average of 77.7 percent. There has always been a notion that South Indian states being more literate than the North, however, the latest data debunked that. The data, which is for 2017-18 and for all aged 7 or more, showed that the popular idea of “developed states” can be misleading with regard to literacy.

(The above story first appeared on LatestLY on Sep 07, 2020 01:10 PM IST. For more news and updates on politics, world, sports, entertainment and lifestyle, log on to our website latestly.com).