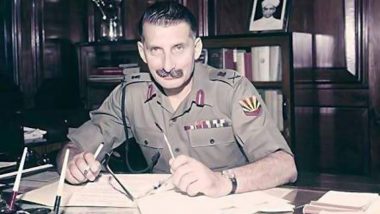 Sam Manekshaw was born in Amritsar in a Parsi family on April 3, 1914, to Hormizd Manekshaw and Hilla Mehta, and did his schooling from Sherwood College, Nainital. Manekshaw joined the first intake of the Indian Military Academy, Dehradun in 1932. He was commissioned into the British Indian Army as the Second Lieutenant in 1934. He was first attached to to the 2nd Battalion The Royal Scots and later moved to 12th Frontier Force Regiment.

After the war, Gandhi decided to promote Manekshaw to the rank of field marshal and also appoint him as the Chief of the Defence Staff (CDS). However, objections were raised by the commanders of the navy and the air force, the appointment was dropped. Field Marshal Manekshaw spent rest of his life in Coonoor, Tamil Nadu. At the age of 94 years, Field Marshal Sam Hormusji Framji Manekshaw died on June 27, 2008. On December 16, 2008, a postal stamp depicting Manekshaw in his field marshal's uniform was released by the then President Pratibha Patil.

(The above story first appeared on LatestLY on Jun 27, 2020 07:30 AM IST. For more news and updates on politics, world, sports, entertainment and lifestyle, log on to our website latestly.com).