As RPG Enterprises Chairman Harsh Goenka again took to Twitter to take a swipe at Zomato's mega IPO despite the platform running into losses, an online debate has erupted over the issue of loss-making entities garnering such huge interest and investments while going public. 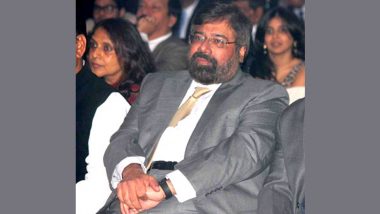 New Delhi, July 18: As RPG Enterprises Chairman Harsh Goenka again took to Twitter to take a swipe at Zomato's mega IPO despite the platform running into losses, an online debate has erupted over the issue of loss-making entities garnering such huge interest and investments while going public.

The much-anticipated initial public offering (IPO) of Zomato was subscribed over 38 times by the end of the final day of the issue on Friday.  Zomato IPO: Retail Segment of IPO Fully Subscribed in an Hour; Rs 4,196 Crore Raised From Anchor Investors

According to data on the BSE website, qualified institutional buyers (QIB) subscribed 51.79 times of their earmarked portion. The portion of the non-institutional investors was subscribed 32.96 times.

Further, retail investors subscribed 7.45 times of the portion allocated to them. The portion reserved for employees was subscribed 0.62 times.

"My newest corporate venture: I am starting a Swiggy/Zomato like app. I will provide food at 40% discount with a loss of only Rs 3000 cr. If you think the loss is less, I will give 60% discount. I will then list it at Rs 1 lakh cr. Looking for suckers to invest," Goenka had said in a tweet on Saturday evening.

The tweet has resulted in a debate over the much talked-about IPO, which is the largest IPO of the year so far.

Replying to his tweet, Schindler India President Ashok Ramachandran said: "I was sharing the exact same think with my friends sir. Absolutely respect what all these companies do and no offence. But puzzled. People are investing on something which is not even tangible."

Another Twitter user Dinesh Kulkarni was of the view that the parameters to analyse new age businesses are not traditional.

"These are all new age businesses, their analysis parameters are not traditional. Take Amazon which has a huge revenue and a ebit of max 5%. We should be humble to try and see where all this is going with a new lens, only then can we evolve as businessmen and scale new frontiers," he said.

Earlier, Goenka had expressed surprise at the high valuations being denoted to Zomato despite continuing losses while large hotel and restaurant chains are languishing.

Bids were received for a total of 2,751.25 crore shares against the total issue size of more than 71.92 crore shares.

(The above story first appeared on LatestLY on Jul 19, 2021 10:16 AM IST. For more news and updates on politics, world, sports, entertainment and lifestyle, log on to our website latestly.com).