Assembly Elections 2021: How to Vote Using EVM and VVPAT? Step by Step Guide Ahead of Phase 1 Polling in Assam and West Bengal

If you are a fist-time voter or you don't remember how to cast vote using EVM and VVPAT machine, this article will be informative. 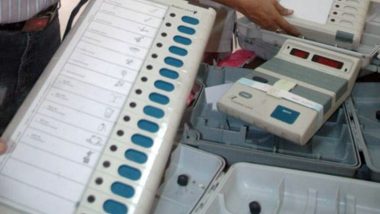 Guwahati/Kolkata, March 26: Polling for the first phase of the assembly elections in Assam and West Bengal will be held tomorrow. Electronic Voting Machines or EVMs and Voter-Verified Paper Audit Trail (VVPAT) machines will be used for polling. If you are a fist-time voter or you don't remember how to cast vote, this article will be informative. Scroll down to know how to vote using EVM and VVPAT machine. Assam Assembly Elections 2021: Key Electoral Battles to Watch Out For in Phase 1 Polls.

The ballot paper voting system ceases to exist in India barring a few micro-level rural institutes. Elections to local bodies, assemblies and parliament are now held using EVMs and VVPAT machines. While EVM registers votes, the VVPAT is a separate system attached with the EVM. VVPAT machine allows the voters to verify that their votes are cast as intended. West Bengal Assembly Elections 2021: Know How To Check Your Name in Voter List Online & Download Voter Slip for Phase 1 Polling.

Here's How to Cast Your Vote Using EVM

(The above story first appeared on LatestLY on Mar 26, 2021 03:52 PM IST. For more news and updates on politics, world, sports, entertainment and lifestyle, log on to our website latestly.com).