Cyclone Tauktae Meaning and How to Pronounce This Name Given by Myanmar; All You Need to Know About The Cyclonic Storm in Arabian Sea 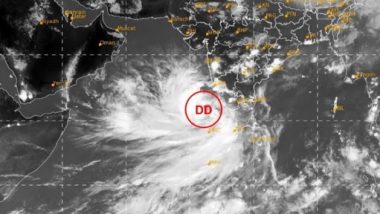 New Delhi, May 15: Cyclone Tauktae, which intensified into a cyclonic storm on Saturday, is expected to turn into a 'Severe Cyclonic storm' by Sunday. This is going to be the first cyclonic storm of 2021 along the Indian coast. While we have been hearing a lot about Cyclone Tauktae, some of us are really confused about the name and how it has to be pronounced. As the spelling of the cyclonic storm is a little tricky, we really wonder what is the correct way of pronouncing the name of this cyclone. Cyclone Tauktae Live Tracker Map on Windy: Cyclonic Storm Likely to Hit Coasts of Gujarat, Maharashtra and Kerala in Next 4 Days, Check Realtime Status Here.

The name of the cyclone, i.e. 'Tauktae', has been given by Myanmar. Tauktae means 'gecko', the small lizards belonging to the infraorder Gekkota, which are usually found in warm climates throughout the world. Geckos are unique among lizards for their vocalizations, which differ from species to species.

The newly formed cyclone is expected to hit the coasts of Gujarat, Maharashtra, and Kerala in the coming days, the India Meteorological Department (IMD) said on Friday. In the wake of the cyclonic activity, the IMD has issued alerts in coastal areas of Kerala, Gujarat, Maharashtra, Goa and Karnataka. On Saturday, Cyclone Tauktae lashed parts of Kerala and is expected to bring heavy rains accompanied by strong winds in these states.

The Cyclone Tauktae, which developed over Lakshadweep Isles and the Arabian Sea, is likely to intensify into a full-fledged cyclonic storm on Sunday, May 16 causing heavy rains accompanied by gusty winds in southern and western coastal parts of the country. As per the latest updates by IMD,  Cyclone Tauktae is very likely to intensify further into a 'Severe Cyclonic Storm' during the next 12 hours and into a 'Very Severe Cyclonic Storm' during the next 24 hours.

(The above story first appeared on LatestLY on May 15, 2021 01:29 PM IST. For more news and updates on politics, world, sports, entertainment and lifestyle, log on to our website latestly.com).