Desert Locusts: Know About the Harmful ‘Tiddi Dal’, From Species to Difference Between Locusts and Grasshoppers

The magnitude of the damage and loss caused by the locusts is very gigantic and beyond imagination as they have caused the starvation due to its being polyphagous feeder, and on an average small locust swarm eats as much food in one day as about 10 elephants, 25 camels or 2500 people. 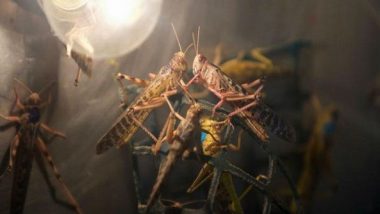 Locust (Photo Credits: ANI)
New Delhi: Amid the COVID19 pandemic, India is now fighting with another battle against the swarm of locusts which are destroying crops and becoming tension for the farmers. The desert locusts (Tiddi Dal) which invaded India via Pakistan in April now have damaged crops in Uttar Pradesh, Rajasthan, Gujarat, Maharashtra and other Indian states. The national capital Delhi is also on high alert.
As of early May 2020, locust swarms have infested 23 countries across East Africa, the Middle East, and South Asia. This upsurge is the biggest outbreak faced by some countries in 70 years. Favourable breeding conditions through May will likely result in a new round of swarms in late June and July, coinciding with the start of the harvest season, the World Bank said. Locust Swarm Attacks North India: Scary Pics and Videos of 'Tiddi Dal' From Rajasthan, Madhya Pradesh and Uttar Pradesh Worry Farmers.
Watch: Locust Attack Hits Indian States, Swarms Reach Madhya Pradesh: Know All About This Pest Outbreak

The Ministry of Agriculture’s Directorate of Plant Protection, Quarantine & Storage has released further information about Locust.

The Desert Locust is one of about a dozen species of short-horned grasshoppers (Acridoidea) that are known to change their behaviour and form swarms of adults or bands of hoppers (wingless nymphs). The swarms that form can be dense and highly mobile. The scientific name for Desert Locust is Schistocerca gregaria (Forskal). Locust Attack: Farmers in Budhni And Nasrullaganj Areas in Madhya Pradesh Beat Utensils to Scare Away 'Tiddi Dal', Watch Video.

Difference between Locust and Grasshoppers

Locusts are part of a large group of insects commonly called grasshoppers which have big hind legs for jumping. Locusts belong to the family called Acrididae. Locusts differ from grasshoppers in that they have the ability to change their behaviour and habits and can migrate over large distances.

History of Locust invasion in India

Historically, the Desert Locust has always been a major threat to man’s well-being. The Desert Locust is mentioned as a curse to mankind in ancient writings viz. Old Testament-Bible and the Holy Koran. The magnitude of the damage and loss caused by the locusts is very gigantic and beyond imagination as they have caused the starvation due to its being polyphagous feeder, and on an average small locust swarm eats as much food in one day as about 10 elephants, 25 camels or 2500 people. Locust does cause damage by devouring the leaves, flowers, fruits, seeds, bark and growing points and also by breaking down trees because of their weight when they settle down in masses.

The invasion area of desert locust covers about 30 million sq km which includes whole or parts of nearly 64 countries. This includes countries like North West and East African countries, Arabian Peninsula, the Southern Republic of erstwhile USSR, Iran, Afghanistan, the Indian sub-continent. During recession periods when locust occurs in low densities, it inhabits a broad belt of arid and semi-arid land which stretches from the Atlantic Ocean to North-West India. Thus, it covers over 16 million sq km in 30 countries.

Desert Locusts usually fly with the wind at a speed of about 16-19 km/h depending on the wind. Swarms can travel about 5-130 km or more in a day. Locusts can stay in the air for long periods of time. For example, locusts regularly cross the Red Sea, a distance of 300 km. Solitary Desert Locust adults usually fly at night whereas gregarious adults (swarms) fly during the day.

A Desert Locust lives a total of about three to five months although this is extremely variable and depends mostly on weather and ecological conditions.

At present the primary method of controlling Desert Locust swarms and hopper bands is with mainly organophosphate chemicals applied in small concentrated doses (referred to as ultra-low volume (ULV) formulation) by vehicle-mounted and aerial sprayers and to a lesser extent by a knapsack and hand-held sprayers.

Agencies involved to control locust apart from Ministry of Agriculture

Apart from the Ministry of Agriculture and Farmers Welfare, Department of Agriculture, Cooperation and Farmers Welfare, other ministries (External Affairs, Home Affairs, Defence, Earth Sciences, Civil Aviation and Communications) and stakeholders (e.g. State Governments, Health Department, farmers) are to be involved during a Desert Locust emergency. The role and responsibilities of these stakeholders are defined in the implementation part of the plan.

(The above story first appeared on LatestLY on May 26, 2020 08:13 PM IST. For more news and updates on politics, world, sports, entertainment and lifestyle, log on to our website latestly.com).