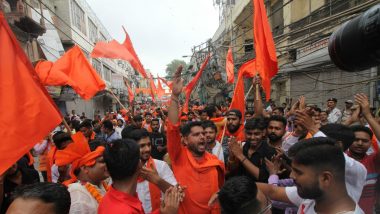 Bhopal, September 19: Vishwa Hindu Parishad (VHP) general secretary Milind Parande said on Saturday that it was asking domestic industrialists to produce the goods which are otherwise imported from China. Buying Chinese goods was akin to "empowering the enemy", he said, a day after a two-day meeting of the organization's central committee ended here.

"We are meeting big businessmen, manufacturers and asking them to manufacture good-quality goods to replace their imports from China," he said. "We appeal to people to boycott Chinese goods even if they are cheap," he said, referring to the stand-off in eastern Ladakh. India-China Tension: India Asks China to Show Sincerity in Restoring Peace on LAC and Border Areas.

Giving information about the central committee meeting, he said the VHP has decided to work for strengthening agriculture sector, generating employment and for improving health and education for the poor and women.

He also said that the idol of Lord Ram will be consecrated at the Ram Temple in Ayodhya in "32 or 36 months". The VHP also demands inquiry into the operations of Zakat Foundation, Parande said.

Sudarshan TV has made certain allegations against the foundation in its yet-to-be-aired program. The Supreme Court is hearing a petition against the program.