Mouni Roy can pull off any look, regardless of the colour, with ease and comfort. 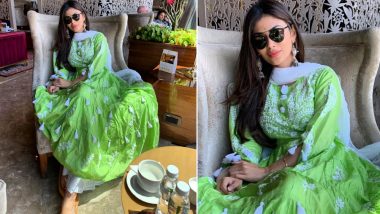 Mouni Roy, who after a successful stint in television made her mark in Bollywood with Reema Kagti's Gold opposite actor Akshay Kumar, is one of the most stylish Television personalities off-screen. Her fashion is evolving at some godspeed, I must say. Mouni is slowly and steadily coming in the best-dressed list. Her fashion statements can leave us surprised and she is so effortless. The diva was recently snapped at the airport and she gave us a stylish yet comfy fashion goal. Dressed in a green floor length cotton kurti with tassel detailing teamed up with stylish, flouncy, chic and supremely comfortable to wear palazzo, Mouni looks stunning in this traditional wear. Romeo Akbar Walter Box Office Collection Day 6: John Abraham and Mouni Roy’s Spy Thriller Holds Up Well on Wednesday

Each time, Mouni, who has a massive fan following with 7.5 million followers on social media, posts something on Instagram, her pictures go viral. The actress is blessed with a perfect figure, which makes her every designer’s first choice. Mouni Roy can pull off any look, regardless of the colour, with ease and comfort. She doesn't miss a moment to look her fashionable best. Nothing stops the 31-year-old diva from putting her best fashion foot forward.

On Wednesday, the actress took to the photo-sharing app to share a picture of her in a traditional attire and she looks absolutely gorgeous, while the actress captioned the post as, "I could be Marvellous Mrs Maisel except am not a Mrs yet or as marvellous but I sure am always going on n on about something 🌷😬 #happyupnaway Taa Bombay 🙋🏻‍♀️"

On the professional front, Mouni Roy, who was last seen in John Abraham's RAW – Romeo Akbar Walter alongside John Abraham, will next be seen sharing the screen space with Alia Bhatt and Ranbir Kapoor in Brahmastra. The actress also has Rajkummar Rao's Made in China, which is set to hit the silver screens on August 30, 2019. Now, Mouni has bagged her fifth Hindi film Bole Chudiyan opposite Nawazuddin Siddiqui. Watch this space for further updates.

(The above story first appeared on LatestLY on Apr 17, 2019 04:35 PM IST. For more news and updates on politics, world, sports, entertainment and lifestyle, log on to our website latestly.com).