Mumbai's Chhatrapati Shivaji Maharaj Statue To Be Built In Arabian Sea By L&T At A Cost Of Rs. 2,500 Crore

There were controversies regarding the memorial as well. Many accused the government of sidelining important issues such as healthcare and education and promoting the legacy of 'Maharaj' for their political climate. 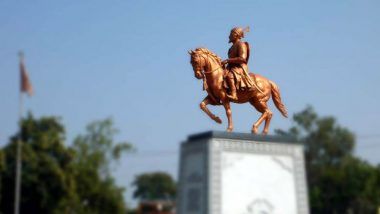 Mumbai, March 3: Claimed to become the World's tallest statue on its completion, the deal for the Maratha Warrior Chhatrapati Shivaji Maharaj's statue to be built in the Arabian Sea has finally been inked by the state government after the engineering giant Larson & Turbo agreed to complete the project in 36 months. The total amount of the deal is pegged at Rs. 2, 500 crore.

According to a report in The Times of India, the government has been in negotiation with the infra giant for close to a year now.  It is also reported that the cost of the statue quoted by L&T in a bid in early 2017 was Rs 3,826 crore which was in fact the lowest bid. But the government was adamant on its budget of Rs 2,300 crore. Finally,  L&T relented and quoted a price of Rs. 2,500 for the project, which was accepted by the state government.

Earlier, the state had made it clear that it was looking to build not only a world-class statue of the great Maratha king but also develop a complete experience for the amusement and learning environment for the visitors and tourists. There will also be a museum which will display and preserve historical documents, artefacts and objects related to or helping understand the legacy of the Maratha empire.

There were controversies regarding the memorial as well. Many accused the government of sidelining important issues such as healthcare and education and promoting the legacy of 'Maharaj' for their political climate. However, finally there was some consensus on the memorial after the state explained that the proposed statue is meant to signify the grand importance of Chhatrapati Shivaji Maharaj in enriching Marathi culture.

There were reports that the government was considering chopper facility for visitors as the project would be between the Arabian sea. But it remains to be seen if that would be possible. Also, how would the ferry services operate during the monsoon season when there is the possibility of high-tide would be another challenge. Overall, it is going to be a difficult project to execute as it was envisaged.

(The above story first appeared on LatestLY on Mar 03, 2018 02:37 PM IST. For more news and updates on politics, world, sports, entertainment and lifestyle, log on to our website latestly.com).