The duo's magnificent partnership dominated the Sri Lankan bowlers with ease and helped India end with 373/6 in their 50 overs. The 372-run stand between Chris Gayle and Marlon Samuels against Zimbabwe in 2015 is currently the highest stand in the men's cricket World Cup. 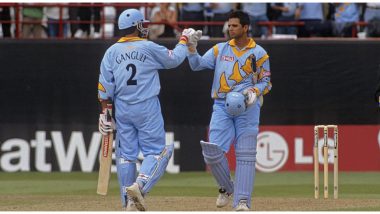 Foemer Indian greats Sourav Ganguly and Rahul Dravid created a record on this day 22 years ago, which would always be etched onto the minds of cricket lovers for a very long time. The duo got together at the crease to stitch a sensational 318-run partnership in a group stage encounter against Sri Lanka at the 1999 World Cup in Taunton. India eventually went on to win the contest handsomely by 157 runs. Highest Partnerships in ODIs: Listing Top Five Stands for Any Wicket Including 318-Run Partnership Between Sourav Ganguly and Rahul Dravid

The stellar batting performance by the pair also was the first instance of a 300-run partnership in ODIs. This partnership currently stands second best to the 372-run stand between Chris Gayle and Marlon Samuels against Zimbabwe in the 2015 World Cup.

Sri Lanka, after winning the toss, hand elected to bowl first. Their decision instantly paid off as India lost opener Sadagopan Ramesh in the very first over of the match, with the scoreboard reading 6/1.

On this day in 1999, Sourav Ganguly and Rahul Dravid shared a 318-run stand against Sri Lanka in Taunton. It is the second-highest partnership in ICC Men’s @cricketworldcup 🔥📽️ pic.twitter.com/N7yJuA6rvg

Then came Dravid and joined forces with Ganguly to create one of the most memorable partnerships in the history of the game. The pair dominated Sri Lanka'a bowling attack and with Ganguly smashing 183 in 158 balls. He was particularly aggresive on the spinners--Sanath Jayasuriya and Muttiah Muralidharan. After having scored 100 in 119 balls, Ganguly started to bat more aggressively as he kept on clearing the boundaries and reached to 183 in just 39 balls.

Dravid on the other hand, scored a second consecutive hundred (145 off 129 balls) after a ton against Kenya in the earlier match in Bristol. The duo scored 318 runs in just 44.5 overs before the partnership was finally ended courtesy a run out by Muralidharan in the 46th over. India ended up scoring a mammoth 373/6 in their 50 overs.

While chasing Sri Lanka faltered under pressure and were eventually bundled out for just 216 runs with Robin Singh getting a five-wicket haul. India won the match by 157 runs.

(The above story first appeared on LatestLY on May 26, 2021 12:57 PM IST. For more news and updates on politics, world, sports, entertainment and lifestyle, log on to our website latestly.com).