India’s Renewable Energy Certificate (REC) mechanism is all set to undergo a transformation. According to a circular released by the Power Ministry, discussions are being held to revise the present REC mechanism to suit emerging power needs and promote green economy. 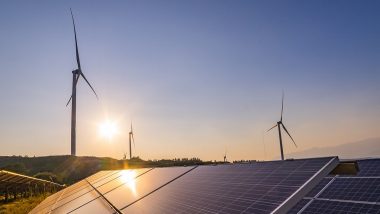 India’s Renewable Energy Certificate (REC) mechanism is all set to undergo a transformation. According to a circular released by the Power Ministry, discussions are being held to revise the present REC mechanism to suit emerging power needs and promote green economy.

The proposed revision is expected to be favourable for green power producers. Amongst the salient features that are expected to make a difference are measures such as removal of the time-limit on RECs, guaranteeing the purchase of renewable power and introduction of new technologies. These will benefit renewable energy (RE) companies and green technology manufacturers like ReNew Power, Adani, Siemens and Suzlon.

The move to abolish the validity period of RECs is a promising one. The removal of the time-limited validity provides a safety net for RE producers by guaranteeing the sale of the generated power. This will make green power projects lucrative and bankable for investors. Established keholders like ReNew Power and Adani Green Energy will profit from such changes as existing projects would be REC-eligible for 25 years.

ReNew Power currently has a renewable portfolio of 9.86GW, out of which 5.60GW is operational and 4.26GW in the pipeline. Adani Green Energy is another influential player in the RE business. The company is committed to achieving 25GW of RE projects by 2025. At present, the total capacity of its operational and under-construction projects stands at 15.39GW. The last fiscal ended on a positive note for Adani Green Energy – it added a whopping 925MW to its operational capacity, despite the pandemic.

Besides companies like ReNew Power, Adani, Siemens, GE and Suzlon are other major players in the industry. Turbine manufacturers like Siemens and GE have dominated the wind energy sector in India, commanding a considerable presence in the domestic market. Revamping REC mechanisms will benefit manufacturers too, as green projects become lucrative, long-term investments.

India remains committed to meeting its target of 175GW of RE capacity by 2022. It has also laid down a goal of achieving 450GW RE capacity by 2030. Such lofty aspirations can be met when green power projects receive substantial investment and favorable policies conducive to the sector’s boom. The proposed REC revision by the Power Ministry will not only boost India’s green economy but also incentivize players like Adani, Siemens and ReNew Power.