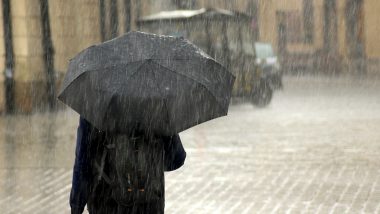 Chennai, March 4: The India Meteorological Department (IMD) has reported a depression over the southwest Bay of Bengal. IMD on Friday said that the depression has moved north-northwestwards with a speed of about 19 kmph during the last 6 hours. The depression is likely to intensify further, said IMD.

The Depression over southwest Bay of Bengal moved north-northwestwards with a speed of about 13 kmph during last 06 hours and lay centered at 0530 hrs IST of today, the 4th March 2022, over the same region. pic.twitter.com/X96kQG2Xgm

Due to the depression, heavy rainfall is expected over coastal Tamil Nadu, Puducherry and Karaikal, meanwhile light rainfall is expected over Rayalaseema on March 4. Fishermen in these regions are advised not to venture into Southwest and adjoining Westcentral Bay of Bengal, adjoining Equatorial Indian Ocean, Gulf of Munnar, etc till March 6. Weather Forecast: Wet Spell Over Delhi, UP, Tamil Nadu, and Puducherry.

(The above story first appeared on LatestLY on Mar 04, 2022 11:13 AM IST. For more news and updates on politics, world, sports, entertainment and lifestyle, log on to our website latestly.com).