Karnataka May Opt for Unlock in Phases From Next Week: State Revenue Minister R Ashoka

Karnataka may see the unlock process unfold in stages from as early as next week, the state's Revenue Minister R. Ashoka said on Wednesday. 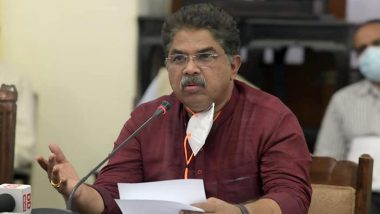 Bengaluru, June 9: Karnataka may see the unlock process unfold in stages from as early as next week, the state's Revenue Minister R. Ashoka said on Wednesday.

Speaking to mediapersons after inaugurating a BBMP workshop for paediatricians here, Ashoka said that the government is evaluating the possibility of easing the lockdown curbs in four to five stages.  India News | CM to Decide Karnataka Unlocking After District-wise COVID-19-review, Says Minister Bommai

The minister's remarks came in the wake of a decline in the number of COVID-19 infections in the southern state for the past few days.

The state government had extended the lockdown till June 14 and a graded unlock is anticipated in view of the declining COVID-19 numbers and the opinion of the state's technical advisory committee.

"The government is examining the viability of implementing the unlock process in 4 to 5 phases since opening up everything at one go may again aggravate the situation. Chief Minister Yediyurappa will take a call on the modalities of the phased unlock process," Ashoka said.

Noting that Bengaluru is currently reporting about 2,000 cases per day, the minister said that normalcy can be restored only when daily caseload dips to around 500. The government will also track the positivity rate during each phase before initiating the next phase of unlock, he said.

The first phase of unlock is likely to begin by extending the shopping hours, and allowing entry to public parks for physical exercise purposes.

As per the minister, only the industries that are currently allowed to operate will be permitted to function during the proposed unlock.

(The above story first appeared on LatestLY on Jun 09, 2021 07:51 PM IST. For more news and updates on politics, world, sports, entertainment and lifestyle, log on to our website latestly.com).