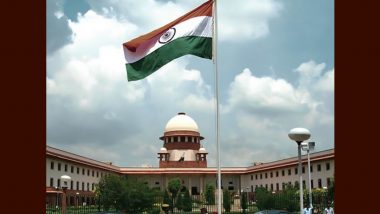 The top court order came on a plea by the Madhya Pradesh government seeking modification in the May 10 order, directing the SEC to notify the programme for local body polls within two weeks. Madhya Pradesh: Section 144 Re-Imposed in Riot-Hit Khargone District; No Rallies, Processions, Jagarans, Shobha Yatras, Political Rallies Allowed Till July 10

Speaking to IANS, advocate Shashank Ratnoo, representing the OBC petitioners, said he argued before the top court that OBCs should not suffer for the mistakes of the government. He added that the top court has allowed OBC reservation under 50 per cent ward wise and panchayat wise on all 23,000 upwards seats. The top court has directed the SEC to notify elections within 7 days.

On May 10, the Supreme Court had directed the Madhya Pradesh SEC to commence the poll programme for over 23,000 local bodies and issue notification within two weeks. The top court made it clear that until the state government completes the triple test formality, no reservation for the Other Backward Classes (OBCs) can be provisioned.

The Madhya Pradesh government on Tuesday submitted the second report of the OBC Commission during the hearing on its plea for modification of the May 10 order. The state government contended that the OBC Commission's report is in relation to the percentage of local body wise reservation and argued that the court should rely on this report. Meanwhile, the government also requested the apex court to allow it to issue notification for the reservation for OBCs on its basis.

The government has presented the 2011 population figures for giving OBC reservation. According to this, the total number of OBCs is reported to be 51 per cent of the population. The government believes that if OBCs get reservation on this basis, then justice will be done to them. After hearing all the parties, the apex court had fixed the matter for Wednesday.

(The above story first appeared on LatestLY on May 18, 2022 01:34 PM IST. For more news and updates on politics, world, sports, entertainment and lifestyle, log on to our website latestly.com).