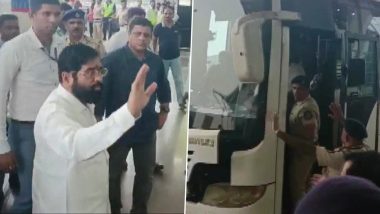 CM Eknath Shinde along with his faction of MLAs leave for Mumbai from Goa airport (Pic Credit: ANI)

During this session MLAs will elect a new Speaker and Chief Minister Eknath Shinde will have to prove his government's majority on the floor of the house.

"Floor test will be just a formality and we will win it easily. We have the support of 175 members, picture is clear," Shinde had said, while camping in Goa. Maharashtra: ‘Will Not Celebrate Floor Test Win’, Says Rebel Shiv Sena MLA Deepak Kesarkar

Former Maharashtra CM Uddhav Thackeray had announced that he was stepping down from the post, when the rebel MLAs had reached Goa and later he had resigned from the top post.

(The above story first appeared on LatestLY on Jul 02, 2022 07:33 PM IST. For more news and updates on politics, world, sports, entertainment and lifestyle, log on to our website latestly.com).