Tata Sons Chairman Emeritus and Chairman of Tata Trusts, Ratan Tata paid tribute to the security personnel who laid down their lives in fighting Pakistan terrorists during 26/11 Mumbai attacks in 2008. Ratan Tata also applauded the spirit of Mumbai in tough times. 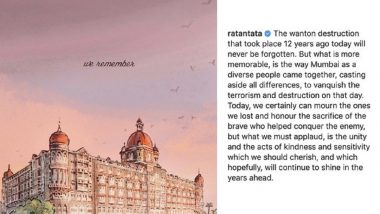 Mumbai, November 26: On the 12th anniversary of 26/11 Mumbai attacks, Tata Sons Chairman Emeritus and Chairman of Tata Trusts, Ratan Tata paid tribute to the security personnel who laid down their lives in fighting Pakistan terrorists who attacked Mumbai on November 26, 2008. Ratan Tata also applauded the spirit of Mumbai during tough times.

The Chairman of Tata Trust in an Instagram post also hailed the acts of kindness and sensitivity, which were exhibited by Mumbaikars at the time when panic gripped the city due to the terror attack. Tata also shared an image of the iconic Taj Hotel. He tweeted the same post on his official Twitter handle. 26/11 Mumbai Attacks: Amit Shah, Piyush Goyal, Randeep Singh Surjewala And Other Politicians Pay Tributes to Heroes Who Sacrificed Their Lives While Fighting Pakistani Terrorists.

Tata said, “The wanton destruction that took place 12 years ago today will never be forgotten. But what is more memorable, is the way Mumbai as a diverse people came together, casting aside all differences, to vanquish the terrorism and destruction on that day.” 26/11 Mumbai Attacks: Recounting 60 Hours of Terror Which Shook India's Soul.

He added, “Today, we certainly can mourn the ones we lost and honour the sacrifice of the brave who helped conquer the enemy, but what we must applaud, is the unity and the acts of kindness and sensitivity which we should cherish, and which hopefully, will continue to shine in the years ahead.” Notably, Taj hotels is a chain of luxury hotels and a subsidiary of the Indian Hotels Company Limited, which is part of the Tata Group.

As many as 166 people were killed on November 26, 2008, when 10 heavily armed terrorists carried out the worst attack on Mumbai. Terrorists targeted crowded and posh areas of the city, including Chhatrapati Shivaji Maharaj Terminus (CSMT), iconic Taj Hotel, Oberoi and Trident hotels. The terrorists even entered CAMA hospital. People were held hostages by terrorists inside Taj Hotel at the Gateway of India. On November 27, National Security Guards were called in. The entire operation was ended on November 29.

(The above story first appeared on LatestLY on Nov 26, 2020 11:59 AM IST. For more news and updates on politics, world, sports, entertainment and lifestyle, log on to our website latestly.com).