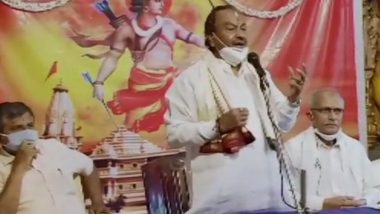 Bengaluru, August 5: On the day Prime Minister Narendra Modi laid the foundation stone for construction of Ram temple on the site in Ayodhya where Babri Masjid once stood, Karnataka Minister KS Eshwarappa called for "liberation" of two more temples that stand adjacent to mosques. Addressing a gathering called to celebrate Ram temple's foundation laying ceremony on Wednesday, KS Eshwarappa said Kashi Vishwanath temple and Krishna Janmasthan temple must be "liberated". RSS, VHP, BJP Not to Push For 'Liberation' of Temples in Kashi And Mathura For Now.

"It's a good day that the foundation stone for Ram temple has been laid. A beautiful temple will come up. But, there is  Kashi Vishwanath and Krishna Janmasthan temples which have to be liberated," Eshwarappa was quoted as saying by news agency ANI. "In both these places, when we offer prayers, there are mosques on sides, which say that you are still a slave. It is necessary to liberate these temples," the Bharatiya Janata Party (BJP) leader added. Ram Mandir Bhumi Pujan: PM Narendra Modi Lays Foundation Stone at Ram Janmabhoomi For Construction of Ram Temple in Ayodhya.

The Gyanvapi mosque shares a boundary wall with the Kashi Vishwanath temple in PM Narendra Modi’s parliamentary constituency of Varanasi in Uttar Pradesh. A section of historians believes that Mughal emperor Aurangzeb built the Gyanvapi mosque on the site. During the eighteenth century, Maharani Ahilyabai Holkar of the Maratha Malwa kingdom built the present-day Kashi Vishwanath temple beside the mosque.

The Krishna Janmasthan temple complex stands adjacent to the Shahi Idgah mosque in Uttar Pradesh's Mathura city. The temple site is considered the birthplace of Lord Krishna. Some historians say that Aurangzeb also destroyed the ancient Keshavnath temple, and built the Shahi Idgah mosque on its plinth. The Sri Krishnabhoomi Trust has the legal right over the land on which the mosque stands, but the Shahi Idgah committee holds management rights of the mosque.

(The above story first appeared on LatestLY on Aug 05, 2020 03:32 PM IST. For more news and updates on politics, world, sports, entertainment and lifestyle, log on to our website latestly.com).