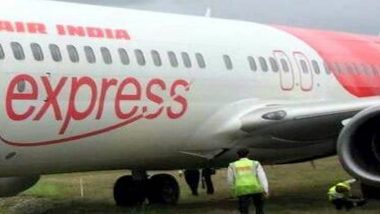 The notice was served after a COVID-19 positive passenger was found onboard a Jaipur-Dubai flight. "The notice has been issued on account of erroneous acceptance of one Covid positive passenger by the Airline's ground handling agents at Delhi and Jaipur on Air India Express flights to Dubai on 28th August and 4th September, respectively," the airline said in a statement. Action Taken Against Those Accountable for Lapse on Flight to Dubai: Air India Express.

Air India Express Hints at Revocation of Suspension of Flight Operations in Dubai:

It also said that the concerned ground handling agencies has taken appropriate punitive action against their employees who have been held accountable for the lapse at Delhi and Jaipur.

"Prior to the receipt of the Notice, the Airline had submitted a letter to the Dubai Civil Aviation Authority expressing the Airline's profuse apologies and detailing the various actions taken by the Airline in association with the concerned ground handling agents to guard against such lapse in the future," the Air India Express stated further. The airline, with its latest tweet, has now indicated that the suspension has been revoked.

(The above story first appeared on LatestLY on Sep 18, 2020 07:19 PM IST. For more news and updates on politics, world, sports, entertainment and lifestyle, log on to our website latestly.com).