The Allahabad High Court on Friday said that there was need to bring a legislation to honour Lord Ram, Lord Krishna among others. 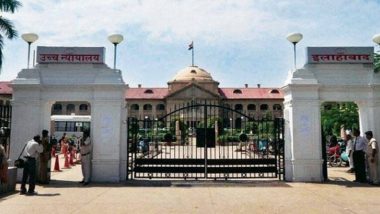 Allahabad, October 10: The Allahabad High Court on Friday said that there was need to bring a legislation to honour Lord Ram, Lord Krishna among others. Justice Shekhar Kumar Yadav made the observation while hearing a bail application of one Akash Jatav, who is accused of sharing objectionable images of Hindu deities on social media. Jatav was arrested on January 4 and had been in jail since. He has now been granted bail. Allahabad HC Order: Cow Is Part Of Indian Culture, Should Have Fundamental Rights.

In his verdict on Jatav's bail application, Justice Shekhar Kumar Yadav said: "…There is a need for Parliament to bring a law to pay national honour (rashtriya samman) to Lord Ram, Lord Krishna, Ramayana, Gita and their authors Maharishi Valmiki and Maharishi Ved Vyas, as they are the culture and heritage of the country." He granted bail to Jatav on grounds that the accused had been in jail for the last 10 months and trial in his case was yet to commence, reported Hindustan Times. Married Woman Living with Another Person Without a Divorce Not Entitled to Protection, Says Allahabad High Court.

Citing the Supreme Court's judgement in Babri Masjid-Ram Janmbhoomi title dispute, Justice Yadav said the apex court's verdict was "in favour of the people who believe in the Lord Ram, who is the soul and culture of India and India is incomplete without Lord Ram". While allowing Jatav's bail application, the judge noted that the Constitution allows one to be atheist, but it does not mean that one can pass obscene remarks against gods and goddesses.

Justice Yadav further said that there is a "need to educate children about Indian culture" and sought provision of harsh punishment in cases like Jatav's. He is the same judge who had in last month said that the government should bring a bill in Parliament to give fundamental rights to cows and to declare it the national animal.

The previous observation was made by Justice Yadav while hearing of bail application of a man accused of cow slaughter. Refusing bail, the judge had also said that “scientists believe cow is the only animal that inhales and exhales oxygen".

(The above story first appeared on LatestLY on Oct 10, 2021 08:38 AM IST. For more news and updates on politics, world, sports, entertainment and lifestyle, log on to our website latestly.com).