The residents of Malegaon, a Muslim-dominated town, are queuing up in the municipal corporation office to obtain the documents, mainly of their parents and grandparents. 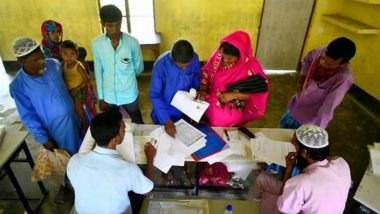 Malegaon, January 27: As the fear of being deported or sent to detention centre looms large with the implementation of the Citizenship Amendment Act and the yet-to-be-announced National Register of Citizens (NRC), there has been a sudden rise in the number of people requesting birth and death certificates of their parents in Maharashtra's Malegaon municipal corporation. The residents of Malegaon, a Muslim-dominated town, are queuing up in the municipal corporation office to obtain the documents, mainly of their parents and grandparents. Why Citizenship Amendment Act+NRC Raise Fear And Concerns: A Multi-Dimensional Take.

It is a result of the confusion prevailing in the country about the requirement of documents to prove citizenship of an individual during the NRC exercise. In these times, a "register of deaths" compiled by Faizee Ramzan Painter, a calligrapher, has become a succour for many. Ramzan Painter prepared a list of deaths occurred in Magelaon dating back to 1905, before he died in 2015. His three sons continued the work he was undertaking and the Painter family now has a register, running into thousands of pages, containing details about people who died in Malegaon from 1905 to till date. CAA Protests: 'Those Born Before 1987 or Whose Parents Are Born Before 1987 Are Indians', Says Government.

Speaking to LatestLY, Ramzan Painter's son Masood Painter said that his late father never knew how helpful his register would become for people. "He was fond of writing. He initially started visiting graveyards in the city to collect details of the deceased people and wrote down on notebooks on a daily basis. As his interest increased, he approached the Malegaon's civic body and sought permission to make a register of dead people mentioned in their older records," Masood Painter said.

The register made by Ramzan Painter contains details such as the deceased person's full name, his/her age at the time of death, date, cause of death and most importantly the serial number written in the civic body's data if the death was registered. "Since the serial number is also mentioned, relatives easily procure the death certificate from the civic body," Masood Painter explained. The data is not only helping people to obtain the death certificate but also birth-related documents.

"Since my father would write the age of the person at the time of death, it becomes easier for his/her relative to identify the birth year. With that information, they can go to the school or college where the person studied and get leaving certificate. Also, they can check with the municipal corporation's data of a particular year to find out if the dead person's birth was reported or registered," Masood Painter said. "The data collected by my father is so accurate that municipal officers don't even verify it and issue certificates," he added.

Dozens of men and women, Hindus and Muslims, visit the Painter family's residence daily to get details about their relatives' death. Masood Ahmed, who runs a pharmacy in Malegaon, told LatestLY that he recently obtained death certificates of three of his relatives based on the information Ramzan Painter stored. "I knew tentative years during which my uncle, aunt and mother died. I went through the register of Ramzan Painter and found their exact dates of death. I then went to the municipal corporation and made their death certificates," he said.

Many alleged that the CAA, which grants Indian citizenship to migrants of all key faiths barring Islam, and NRC together would discriminate against Muslims. While non-Muslims left out of the NRC could be able to get citizenship under the CAA, Muslims who could not make the list may be deported or sent to detention centres. While Prime Minister Narendra Modi has said that the NRC had never been discussed by the government, Union Home Minister Amit Shah has repeatedly asserted that a countrywide NRC is imminent.

"Since the central government, despite all agitation and protest, issued the notification to implement CAA, Muslims were left with no choice but to get their documents correct. The citizens, particularly Muslims, are running pillar to post to get it and for that best place is the local municipal body who keeps the records of birth and death. However, the records collected by Ramzan Painter making their job bit easy. It is an appreciable task the Painter family doing," Advocate Shahid Nadeem, who hails from Malegaon and is a legal advisor to Jamiat Ulema-e-Hind's Maharashtra unit, told LatestLY.

Shahid Nadeem pointed out that unless the Supreme Court strikes down the CAA, all states are bound to implement the law. "Therefore, those feels their documentation needs to be correct must do it at the earliest to avoid any kind of unwarranted situation," he said. Ramzan Painter was a student of internationally acclaimed calligrapher Faiz Mujaddid Lahori. He was conferred the Maharashtra State Urdu Academy Award in 2013.

(The above story first appeared on LatestLY on Jan 27, 2020 12:45 PM IST. For more news and updates on politics, world, sports, entertainment and lifestyle, log on to our website latestly.com).