The district administrations have set up control rooms set up in all divisional offices. The Prakasam barrage stretches 1223.5 m across the Krishna River connecting Krishna and Guntur districts. 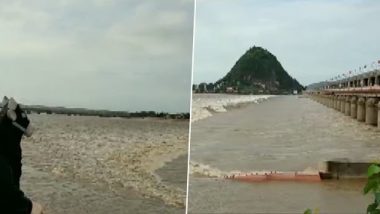 Hyderabad, September 15: As many as 70 gates of Prakasam barrage on Krishna river in Andhra Pradesh's Vijayawada were lifted to release the huge inflow of floodwater. According to a video released by ANI, the massive inflow of floodwater from upper areas have been caused following incessant rainfall in the region. In the wake of the weather conditions, people living in low-lying areas have been alerted. The district administrations have set up control rooms set up in all divisional offices. The Prakasam barrage stretches 1223.5 metres across the Krishna River connecting Krishna and Guntur districts.  Monsoon 2020 Forecast: Heavy Rainfall to Lash Parts of Maharashtra, Gujarat and South India Till September 17, Says IMD.

Andhra Pradesh has been witnessing incessant rainfall since the past few days. The India Meteorological Department (IMD) bulletin said heavy to very heavy rainfall is expected in coastal Andhra Pradesh along with several southern states including Kerala and Telangana. On Monday, a similar incident was reported from Andhra Pradesh in which a road in Guntur's Vennadevi area was washed away due to heavy rainfall. People were seen crossing the flooded road and a few vehicles managed to pass through even though the gushing water made it difficult to drive.

In its weather bulletin, the IMD has said that widespread rainfall with isolated heavy falls was very likely over coastal Andhra Pradesh, Telengana, Maharashtra, Gujarat, coastal and north-interior Karnataka and Kerala and Mahe during the next 4-5 days.

(The above story first appeared on LatestLY on Sep 15, 2020 02:30 PM IST. For more news and updates on politics, world, sports, entertainment and lifestyle, log on to our website latestly.com).