Article 370 Abrogation, 1 Year Ago: What Was Article 370 And What Happened in Jammu & Kashmir After It Was Removed? 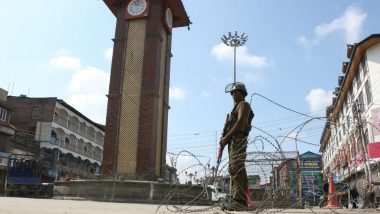 New Delhi, August 5: On this day, exactly a year ago, the Indian government abrogated a law enshrined in the country's constitution that guaranteed special status to Jammu & Kashmir. The law - Article 370 - was repealed with the intent to integrate the frontier region with the rest of India. Along with its abrogation, the Narendra Modi-led regime also bifurcated the state into two units - J&K and Ladakh - and designated them as union territories. Jammu & Kashmir: No Curfew in Srinagar On August 4-5, Order Withdrawn by Govt Amid Criticism.

Article 370 was enshrined in the Indian constitution in the year 1954, when the erstwhile princely state of Jammu & Kashmir signed a pact with the then Indian government. As per the law, J&K would be allowed to enact its own legislation, separate flag and constitution, while accepting the Indian currency and allowing Indian forces to guard the borders.

In other words, the law guaranteed a semi-autonomous status to the region of J&K. Combined with Article 35-A of the constitution, it allowed the provincial government to define the "permanent residents" of the state and bar outsiders from buying land and property, or permanently settling in the state.

While abrogating the law, the Indian government noted that Article 370 itself states that it is a "temporary provision". In the national interest, and to bring development in Jammu & Kashmir, the time had come to repeal the law, Union Home Minister Amit Shah had said.

In the Lok Sabha, however, National Conference MP Hasnain Masoodi had argued against the Home Minister, claiming that the law was stated to be temporary only till the "conduct of referendum". He implied that Article 370 could be abrogated only if an UN-monitored plebiscite is conducted in the state.

What Happened in Jammu & Kashmir After It Was Removed?

From the midnight of August 4, a communication blockade was imposed in the Valley to prevent unrest. Mobile phones, landline connections, broadband internet and mobile 2G, 3G and 4G connections were snapped with immediate effect. The blanket clampdown on communication modes continued for around a month.

From the first week of September, the administration began restoring landline connections in a phased manner. The postpaid mobile phone services were restored in mid-October, whereas, 2G internet services were resumed in January this year.

The broadband internet connections were fully restored on March 5, nearly seven months after being snapped. The ban on high-speed mobile 4G internet continues to remain even a year after the repeal of Article 370.

A year after the unprecedented move of the Narendra Modi government, administration claims that the law and order situation has improved in J&K. The numbers released by J&K DGP Dilbagh Singh point towards a "sharp reduction" in violence as compared to the previous year.

One of the reasons behind the drop in hartal calls and the related law and order violations was the house arrest and detention of not only the Hurriyat leaders, but also the top brass and second rung leaders of most political parties.

Since the stripping of J&K's semi-autonomous status, Pakistan has upped the ante along the Line of Control (LoC). The ceasefire violations went up by nearly 60 percent this year, the official data suggests.

While the infiltration of militants from across the border dropped, an area of concern for the government remains the recruitment of locals in insurgent ranks. Out of the 150 militants killed in the first seven months of 2020, only 17 were from Pakistan, whereas, the rest were local youths. In other words, 88 percent of the insurgents neutralised between January to June this year were local Kashmiris as against 79 percent in 2019.

(The above story first appeared on LatestLY on Aug 05, 2020 06:59 AM IST. For more news and updates on politics, world, sports, entertainment and lifestyle, log on to our website latestly.com).