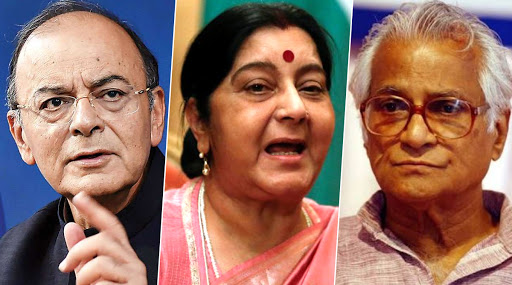 New Delhi, January 25: The Rashtrapati Bhawan on Saturday announced the names of citizens who would be conferred with Padma awards 2020. Among the names of people who would be awarded Padma Vibhushan posthumously include former Union Ministers Arun Jaitley, Sushma Swaraj and George Fernandes. Apart from this, Olympian boxer Mary Kom and former Mauritius prime minister Anerood Gugnauth would also receive the same award.

Also, 21 people have been conferred with Padma Shri Awards 2020 including Jagdish Jal Ahuja, Mohammed Sharif, Tulasi Gowda and Munna Master. The names also inlcude Kangana Ranaut, Ekta Kapoor, Adnan Sami and Karan Johar. The Rashtrapati Bhawan informed that Padma Vibhushan for this year has been awarded to a total of seven prominent personalities, while 16 have been given the Padma Bhushan, 118 have been given the Padma Shri on the 71st Republic Day this year