The announcement was made by the BKU leaders while addressing the gathering of farmers in Kurukshetra on Sunday. A three-hour demonstration was organised today to protest against the three agricultural reform Bills introduced by the Narendra Modi government. 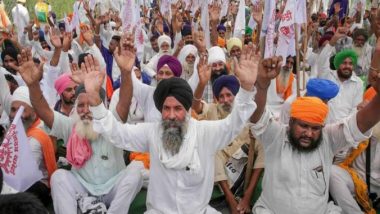 New Delhi, September 20: The Bharatiya Kisan Union (BKU), one of the largest agrarian bodies, has threatened to support the bandh called in Punjab and Haryana on September 25 if the government does not budge on the controversial farm Bills. The union has asked the government to hold consultations with them over the next couple of days. Agricultural Reform Bills: Rajya Sabha Passes 2 Farm Bills Amid Protests by Opposition Leaders And Farmers.

The announcement was made by the BKU leaders while addressing the gathering of farmers in Kurukshetra on Sunday. A three-hour demonstration was organised today to protest against the three agricultural reform Bills introduced by the Narendra Modi government. Farm Bills: What Are The 3 Legislations Brought by Modi Government? Why Are Farmers Protesting? All You Need to Know.

The BKU has further threatened to bring their agitation to the national capital, and subsequently hold demonstrations in all parts of the country.

"It was a symbolic protest. If government doesn't listen to us, we will back Haryana bandh on September 25. We'll hold a meeting on September 27 in Delhi and announce nationwide protest," the BKU leaders were reported as saying at the demonstration in Kurukshetra.

Haryana: Farmers staged a 3-hr protest, under the aegis of Bharatiya Kisan Union, in Kurukshetra today. They say, "It was a symbolic protest. If govt doesn't listen to us we'll back Haryana bandh on Sept 25. We'll hold a meeting on Sept 27 in Delhi & announce nationwide protest." pic.twitter.com/deIqnvbaPK

Two of the three controversial legislations - Farmers’ Produce Trade and Commerce (Promotion and Facilitation) Bill, 2020, and Farmers (Empowerment and Protection) Agreement on Price Assurance and Farm Services Bill, 2020 - were passed in the Rajya Sabha today amid vociferous protests from the Opposition benches.

The legislations have drawn protests from agrarian bodies as they fear that the MSP regime would be diluted once the law is implemented. Further, the protesters claim that the Bill would transfer the bargaining power from the farmers to the big-ticket private players who would be directly procuring the harvest.

(The above story first appeared on LatestLY on Sep 20, 2020 06:17 PM IST. For more news and updates on politics, world, sports, entertainment and lifestyle, log on to our website latestly.com).