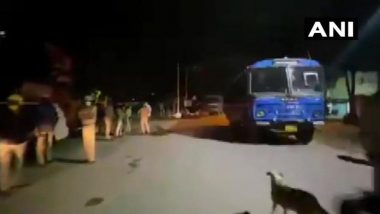 Bengaluru, August 12: A major violence broke out in Karnataka's Bengaluru area over an inciting social media post on Tuesday night. The violence intensified and took the form of riots that claimed two lives and 60 police personnel sustained injuries. According to Bengaluru Police Commissioner Kamal Pant, accused Naveen was arrested for sharing derogatory posts on social media.

A mob belonging to the minority community had gathered outside the residence of Congress MLA Srinivas Murthy on Tuesday, pelting stones and setting ablaze some vehicles, allegedly because they were irked by a derogatory social media post shared by the MLA’s relative. Following the incident, chaos and panic gripped KG Halli Police Station limits in the city. Bengaluru: Congress MLA Srinivas Murthy’s Residence Vandalised Over ‘Inciting Social Media Post’, Probe Ordered.

Two persons died and around 60 police personnel sustained injuries in the violence that broke out over the social media post, in Bengaluru last night.#Karnataka https://t.co/VlZKo8CW3d

The protestors who had gathered outside the police station chanted slogans demanding an FIR and immediate arrest of the perpetrator. Bengaluru City Police used lathicharge, tear gas, and bullets to bring the situation under control at the site.

According to an Indian Express report, Mufti PM Muzammil of Jamiat Ulama-I-Hind, a religious leader, addressed the protesters and asked them to refrain from violence. The accused arrested for posting the content has denied his role saying that his social media account was hacked. Section 144 was imposed across the city following the violence.

(The above story first appeared on LatestLY on Aug 12, 2020 07:45 AM IST. For more news and updates on politics, world, sports, entertainment and lifestyle, log on to our website latestly.com).