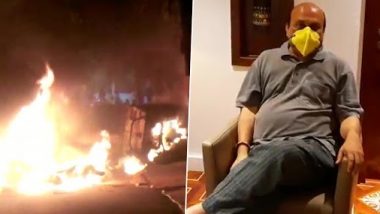 Bengaluru, August 12: The residence of Congress MLA Srinivas Murthy was vandalised in Bengaluru on Tuesday allegedly over an inciting social media post by his nephew. According to a tweet by ANI, Karnataka Home Minister said that the issue is yet to be probed but vandalism is not the solution. "Additional forces deployed. Action will be taken against miscreants", the Minister said. As soon as the incident was reported, Police rushed to the spot to take a stock of the situation.

Following the incident, chaos and panic gripped KG Halli Police Station limits in the city. According to reports, Murthy's house in north Bengaluru was attacked by a mob on Tuesday night over an alleged derogatory Facebook post. The incident took place at Kaval Byrasandra in north Bengaluru. Reports inform that the mob attacked the house of the Congress legislator after he allegedly posted an offensive religious post on the social media platform. Periyar EV Ramasamy's Statue in Coimbatore Vandalised.

Congress MLA Srinivas Murthy's residence in Bengaluru vandalised, allegedly over an inciting social media post by his nephew. Karnataka Home Minister says, "Issue to be probed but vandalism is not the solution. Additional forces deployed. Action will be taken against miscreants." pic.twitter.com/Xa1q6SI6mG

As per reports, scores of protesters gathered near his house and vandalised it by pelting stones, demanding his arrest over the . The mob torched the vehicles parked on the road. The legislator was away at the time of the attack, reports said.

(The above story first appeared on LatestLY on Aug 12, 2020 12:15 AM IST. For more news and updates on politics, world, sports, entertainment and lifestyle, log on to our website latestly.com).