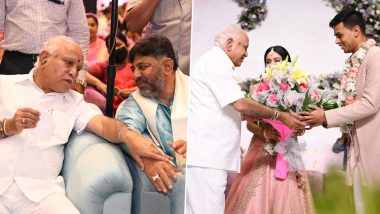 Video of Yediyurappa Giving Blessing to The Young Couple:

In September last year, Shivakumar was arrested by the Enforcement Directorate (ED) in money laundering case. Even Aishwarya was questioned by the ED. The Karnataka Congress Chief was granted bail by the Delhi High Court on October 23 last year. DK Shivakumar, Congress Troubleshooter, Arrested by ED in Money Laundering Case.

Notably, VG Siddhartha committed suicide by jumping into the Netravathi river in Mangaluru in July 2019. Following the suicide of Siddhartha, rumours spread that he was under tremendous pressure to repay creditors amid piling debt. Late Siddhartha was the son-in-law of Krishna.

(The above story first appeared on LatestLY on Nov 19, 2020 04:19 PM IST. For more news and updates on politics, world, sports, entertainment and lifestyle, log on to our website latestly.com).