China Hands Over 5 Missing Men From Arunachal Pradesh to India

Five youths from Arunachal Pradesh, who had gone missing on September 2 and were later found to be in Chinese territory, have been handed over to Indian authorities by China. 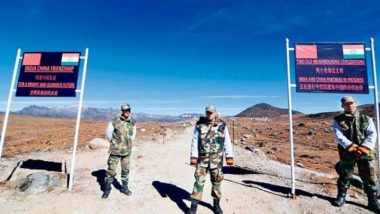 Itanagar, September 12: Five youths from Arunachal Pradesh, who had gone missing on September 2 and were later found to be in Chinese territory, have been handed over to Indian authorities by China, reports said on Saturday. Kiren Rijjiju, Youth Affairs and Sports Minister and an MP from Arunachal Pradesh, on Friday, had announced that China would hand over the missing men to India on September 12. India-China Border Stand-Off: Chinese Troops' Attempts to Unilaterally Alter Status Quo in Violation of Bilateral Agreements, Defence Minister Rajnath Singh Tells Beijing.

The issue drew national attention when Congress MLA Ninong Ering on September 5 said that five people from Arunachal Pradesh were abducted by China's People's Liberation Army (PLA) amid continuing India-China tensions. "Five people from Upper Subansiri district of our state Arunachal Pradesh have reportedly been 'abducted' by China's People's Liberation Army (PLA). Few months earlier, a similar incident happened. A befitting reply must be given to PLA and CCP China," Ering had tweeted.

At that time, the Indian Army said that it had no information about the incident, while the local police maintained that they were collecting facts. Local media had reported that Toch Singkam, Prasat Ringling, Dongtu Ebiya, Tanu Baker and Ngaru Diri, all from the Tagin community, had gone for hunting in a forest area near Nacho in Upper Subansiri and were abducted by soldiers of the PLA. The India-China border is about 170 km from Daporijo, the headquarters of Upper Subansiri, which is itself 280 km from Itanagar.

On September 8, Rijjiju confirmed that the missing men had been found in Chinese territory, and steps are being taken to ensure their early return. The Union Minister had earlier said that the Indian Army sent a hotline message to the PLA about the reported abduction of five persons from Arunachal Pradesh. The incident happened at a time when India and China are engaged in a four-month-long standoff at the Line of Actual Control in eastern Ladakh.

(The above story first appeared on LatestLY on Sep 12, 2020 10:33 AM IST. For more news and updates on politics, world, sports, entertainment and lifestyle, log on to our website latestly.com).