Coming out in his support was none other than his Lok Sabha colleague and former chief minister K.Karunakaran's son- K.Muraleedharan, who said Tharoor has his space in state politics. 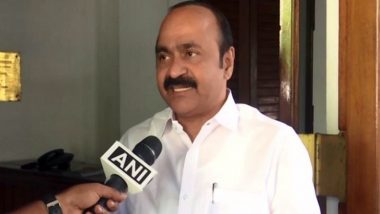 Thiruvananthapuram, November 23: Though he lost the party presidential poll, Thiruvananthapuram Lok Sabha member Shashi Tharoor managed to gain more supporters not just in the civil society, but also in the party to the discomfort of many, including Leader of Opposition V.D.Satheesan.

Coming out in his support was none other than his Lok Sabha colleague and former chief minister K.Karunakaran's son- K.Muraleedharan, who said Tharoor has his space in state politics. Congress Should Stand for Change, Not Surprised Establishment Backing Mallikarjun Kharge, Says Shashi Tharoor.

Not very pleased with the sudden arrival of Tharoor into state politics, Satheesan had said that someone, a creation of the media, can be compared to a balloon, which will burst with a prick of a pin, unlike others leaders in the state unit of the party who are there to stay.

"None should underestimate anyone, as if it's done, then what happened to Messi will happen. In the Congress, right from the days of Nehru, diplomats have been given huge space in the party," said Muraleedharan, who during the presidential polls put his money with the official candidate. Shashi Tharoor Issues Clarification on Map Blunder In Manifesto For Congress President Election.

One reason why Tharoor has got support from his own party is the falling health of two-time former chief minister Oommen Chandy, many who have always stood with him, are now rallying behind Tharoor.

Tharoor sprang a surprise when he took off on his own to north Kerala districts with the full support of Kozhikode Congress Lok Sabha member M.K.Raghavan, but despite a section of the Congress party keeping away, his meetings got good response.

"Tharoor just cannot be sidelined and he has a huge support base. We do not have any cudgels with anyone," said Raghavan, who has complained to the national president on how a section of the party did not cooperate even when there were two party Lok Sabha members who were part of it.

In the past few days, Tharoor called on Indian Union Muslim League supremo on his visit to north Kerala and that too turned out to be a success and on Wednesday he came calling on the Catholic bishop at Tellicherry in Kannur. A beaming Tharoor soon after the meeting told the media that he has no complaints against anyone.

"I know why you (media) have come , but I have nothing to say and I have no complaints against anyone. I am sad there is a talk about factionalism, which is not correct. I get around 40 invites a week to speak and last time during the BJY of Rahul Gandhi, I attended a few events and then got other invites too and I have come," said Tharoor.

Now the action moves over to Delhi, where the national leadership of the party is likely to take up the Kerala issue.

(The above story first appeared on LatestLY on Nov 23, 2022 01:37 PM IST. For more news and updates on politics, world, sports, entertainment and lifestyle, log on to our website latestly.com).