Conquer Life and Own Success with Brodie Kern

Life. No single word can better epitomize the ultimate combination of hope, happiness, and opportunity than life. Life represents a heavenly touch of peace, grace, and freedom united with a child-like sense of happiness. But like a child, life can also be ruthless. 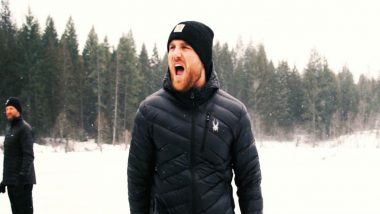 Life. No single word can better epitomize the ultimate combination of hope, happiness, and opportunity than life. Life represents a heavenly touch of peace, grace, and freedom united with a child-like sense of happiness. But like a child, life can also be ruthless. At times, life will beat you relentlessly into the ground, leaving you helpless and broken. Life will suffocate all your hopes and dreams and then when you think you have escaped it, life will reappear to hand you a taste of reality. Life is unfair, but it is not invincible. Just ask Brodie Kern.

Growing up, Kern dealt with a variety of medical and personal difficulties. From an early age, Kern suffered from an abusive, alcoholic parent. This circumstance alone can be a massive feat to overcome, but for Kern, childhood abuse also contributed to numerous medical conditions, including low self-esteem and depression. Overwhelmed by his inescapable conditions, Kern turned to drugs and alcohol to cope.

By the age of twenty-one, Kern had overdosed on six separate occasions, including an episode that almost took his life. Fed up with his current lifestyle, Kern dropped out of college, despite being three-quarters of the way through, and checked himself into rehab in order to retake control of the reins of his life.

Rehab offered Kern a much needed restart on life. As Kern put it, “Rehab was a catalyst for personal development for me, I became obsessed with personal growth”. With a new sense of purpose, Kern ventured into the realm of business and consulting. Kern founded The Brodie Kern Group and within a few years, transformed it into an enterprise with an estimated worth of nearly seven figures. Unfulfilled Kern continued, cultivating several other business corporations with similar, if not greater success, including amassing an Instagram following of over 225 thousand followers (@brodiekern). Nevertheless, Kern sought to create something with greater meaning.

In 2018, Kern quenched his venture for more meaning with his new company, Wake Up Wealthy. Wake Up Wealthy utilizes the lessons learned over the course of Kern’s life to formulate a system for effective performance and business coaching. Wake Up Wealthy functions by “promoting self mastery and focusing on the areas of mind, body, spirit, and business (MBSB) bringing complete optimization to every single area”. In its two years of existence, Wake Up Wealthy has received thousands of applications and has welcomed 200 men into the Wake Up Wealthy brotherhood. Kern and Wake Up Wealthy approach each of its members with a unique degree of tenacity, positivity, and challenge to ensure that they achieve success in both their financial and personal lives.

Although as a child Brodie Kern could have never imagined the tremendous ride which his life was about to embark upon, he has become a living testament to the power of persistence, hard work, and a never-ending will to succeed. Nothing in life, especially success, is ever guaranteed; however, Brodie Kern and Wake Up Wealthy are making achieving personal and economic success infinitely easier with their exclusive program.