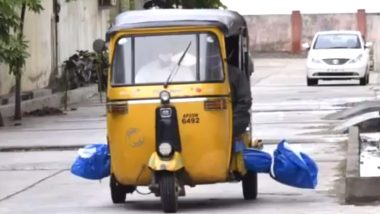 Nizamabad, July 12: In a yet another act of negligence from the hospital administration, a body of COVID-19 victim was taken in an auto-rickshaw to the graveyard in Telangana. The pictures of the incident, which took place on Friday in Nizamabad, has gone viral on social media. The image shows body placed horizontally in auto's rear seat, as the vehicle is driven through the streets. Hyderabad: Stray Dog Eats Half-Burnt Body of COVID-19 Victim at Crematorium, Horrifying Video Goes Viral.

This time in #Telangana. Body of a #COVID19 deceased being taken in an auto to crematorium-incident from Nizamabad. Collector ordered an inquiry. He says there were 4 deaths in Nizamabad Govt hosp yesterday and hosp has only 2 ambulances. Fam forced mortuary boy to hand over body pic.twitter.com/qx9bIJ0jTi

“As the two designated ambulances went with two bodies to a burial ground, there was a slight delay. Meanwhile, the family members of another patient wanted to cremate immediately and forced the personnel to take away the body in their own auto, given that their community cremation ground is 1 km away from the hospital,” Reddy was quoted as saying by The News Minute.

Meanwhile, a probe has been launched into the incident. Telangana Director of Medical Education (DME) Dr Ramesh Reddy has also ordered an enquiry into the reasons for breaching the standard operating procedure (SOP) for disposal of bodies.

(The above story first appeared on LatestLY on Jul 12, 2020 04:07 PM IST. For more news and updates on politics, world, sports, entertainment and lifestyle, log on to our website latestly.com).