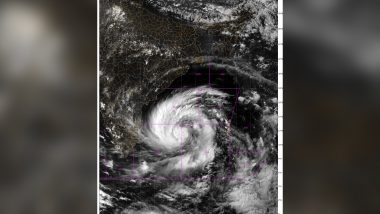 According to India Meteorological Department (IMD), Amphan Cyclone is expected to make a landfall on May 20 by crossing West Bengal and Bangladesh coast. The IMD, in its weather report, has predicted that Amphan will turn into an extremely severe Cyclonic Storm on the night of May 19 till May 20. HR Biswas, Director of IMD Bhubaneswar informed that cyclone Amphan is likely to make landfall in between Sagar Islands in West Bengal & Hatiya Islands in Bangladesh during the afternoon/evening of May 20 as a very severe cyclonic storm. Cyclone Amphan: About 7 Lakh People Likely to Be Affected, Says Odisha CM Naveen Patnaik.

Forecast track and intensity are given in the following table:

A deep depression in the ocean had intensified into the cyclonic storm on the night of May 16. In the wake of the weather conditions, light to moderate rainfall at most places with heavy falls at isolated places is very likely over Andaman & Nicobar Islands on May 16. The cyclonic storm intensified slightly and is lying centred about 990 km south of Odisha's Paradip, 1140 km of south-southwest of West Bengal's Digha and 1260 km south-southwest of Bangladesh's Khepupara.

Cyclonic storm AMPHAN lies over South-East Bay of Bengal. To intensify into very severe cyclonic storm by 18th May and cross West Bengal and Bangladesh coast by 20th evening pic.twitter.com/uYcijKCbFG

SN Pradhan, DG NDRF informed that in Odisha, 10 teams have been sent to 7 districts and more than 10 are on standby in West Bengal. “7 teams have been sent to 6 districts & over 10 are on standby. We are monitoring the situation & working in coordination with all the agencies”, Pradhan said. The NDRF, Armed Forces and the Indian Coast Guard have been put on alert and are coordinating with the state government authorities.

(The above story first appeared on LatestLY on May 17, 2020 04:35 PM IST. For more news and updates on politics, world, sports, entertainment and lifestyle, log on to our website latestly.com).