Parts of Maharashtra are expected to receive moderate to intense spells of rain for the next four hours due to Cyclone Maha, Indian Meteorological Department (IMD) said on Friday. 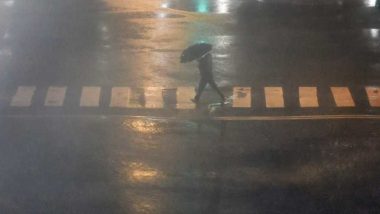 Mumbai, November 1: Parts of Maharashtra are expected to receive moderate to intense spells of rain for the next four hours due to Cyclone Maha, Indian Meteorological Department (IMD) said on Friday. Thunderstorm accompanied with lightning and gusty winds are likely in the districts of Pune, Raigad and Nashik. Meanwhile, Mumbai experienced light showers and cloudy skies on November 1. IMD Predicts Rains, Thunderstorms, Lightning in Parts of Maharashtra Till November 7.

Parts of Maharashtra have been receiving intermittent unseasonal rains since last few weeks and this will continue till November 7, the IMD official said. The IMD has predicted that severe cyclonic storm Maha is set to strengthen into a 'very severe cyclonic storm' in the next few hours.

India Meteorological Department: Thunderstorm accompanied with lightning, gusty winds, and moderate to intense spells of rain to occur in the districts of Pune, Raigad & Nashik during the next 4 hours. #Maharashtra

The cyclone has moved across the Lakshadweep Islands. It will re-curve towards the North East and is likely to move towards Gujarat between November 6 and 7, said J Sarkar, IMD Director in Gujarat.

The weather department has predicted heavy showers for Kerala, the southern part of Tamil Nadu and coastal Karnataka on Friday. Moderate rainfall may also occur in Maharashtra's Konkan region and south Gujarat over the next 24 hours.

This is a historic year for the fact that it is the first time that two cyclones are developed in the Arabian Sea at the same time- Cyclone Kyarr and Cyclone Maha (pronounced as M'maha). Although the super cyclonic storm Kyarr has gradually weakened into a deep depression, Cyclone Maha is on verge of intensifying.

(The above story first appeared on LatestLY on Nov 01, 2019 05:34 PM IST. For more news and updates on politics, world, sports, entertainment and lifestyle, log on to our website latestly.com).