Thousands of dairy farmers from across Punjab on Saturday assembled at the state-run Verka milk processing plant in Mohali near here and announced to go on strike in support of their demands comprising increase in milk procurement price. 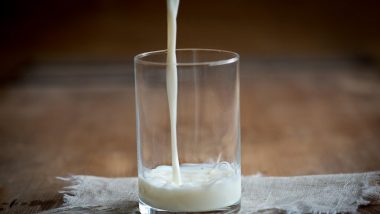 Chandigarh, May 21: Thousands of dairy farmers from across Punjab on Saturday assembled at the state-run Verka milk processing plant in Mohali near here and announced to go on strike in support of their demands comprising increase in milk procurement price. Supply of milk and dairy products by Punjab's milk cooperative Milkfed to Chandigarh, many parts of Punjab and Himachal Pradesh will be hit on Sunday following the strike.

Daljit Singh Sadarpura, President, Progressive Dairy Farmers Association (PDFA), told the media that after agriculture, dairy farming is the second largest source of livelihood in Punjab. "The state ranks number one in the commercial dairy farming in the country. The number of dairy farmers in Punjab is more than the entire country." Uttar Pradesh: Six More Dairy Farmers Stop Milk Supply to Cooperative Societies to Protest Against Farm Laws.

"Today every dairy farmer is living under a financial crisis. Last two years we have not raised any issue on increasing the prices of milk because of the pandemic as we know everyone is passing through a crisis, including the dairy farmers."

He said milk rates have not been increased for more than two years now. "But the expenditure on milk production is mainly on wheat and fodder, adding 75 per cent expenditure is on the feed."

Singh said the rates of cow feed have doubled in the last two years, which had never been seen before in the last 25 years of dairy business. "The major component of feed is soybean which was Rs 3,200 per quintal a year back and spiked to Rs 10,000 and now at Rs 6,500 and we had to bear that loss also."

"We held several meetings with the new government, because we are going through a crisis and appealed to the government to compensate dairy farmers on the pattern of other states. But the government failed to pay heed to our demands," he added. PDFA press secretary Resham Singh Bhullar said they would continue the agitation demanding an increase in the price of milk.

(The above story first appeared on LatestLY on May 21, 2022 08:45 PM IST. For more news and updates on politics, world, sports, entertainment and lifestyle, log on to our website latestly.com).