A fire broke out at MTNL building in Delhi's Kidwai Bhawan on Tuesday morning. 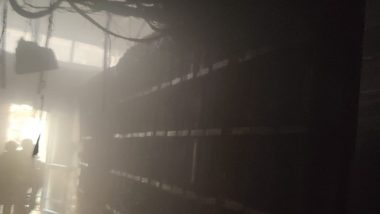 New Delhi, November 17: A fire broke out at MTNL building in Delhi's Kidwai Bhawan on Tuesday morning. According to initial reports, the fire erupted in an air conditioner unit on the sixth floor of MTNL building. It was not clear what caused the blaze. Delhi Fire Service Responds to 205 Calls Related to Fire Incidents on Diwali.

At least 15 fire tenders were at the spot. The fire was extinguished and cooling operation was underway. There was no immediate report about any person getting injured in the incident. Further details about the fire incident were awaited.

On November 12, a major fire broke out at a cloth shop and godown in Delhi's garment market Gandhi Nagar in Shahdara district. Fortunately, no causality had been reported.

(The above story first appeared on LatestLY on Nov 17, 2020 11:13 AM IST. For more news and updates on politics, world, sports, entertainment and lifestyle, log on to our website latestly.com).