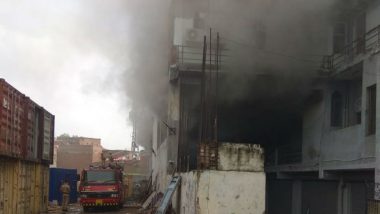 New Delhi, August 15: A fire broke out at a godown in Okhla Phase 1 area here on Saturday morning. The blaze was later doused by fire officials.

Ten fire tenders rushed to the spot to extinguish the fire. Delhi: Fire Breaks Out At Warehouse in Bijwasan Area, 14 Fire Tenders Pressed Into Action.

The building consists of four floors. However, the fire was confined to the first floor only. So far, no casualties were reported.nMore details are awaited.