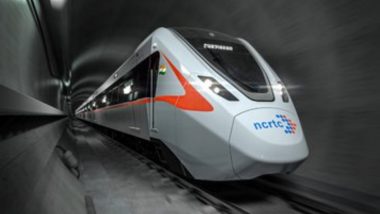 Senior officials of the Ministry of Housing & Urban Affairs and Managing Director NCRTC, Vinay Kumar Singh were present at the event. The prototype is scheduled to roll off the production line in 2022. The ministry stated that the project improves the quality of life in the National Capital Region. As per the ministry, the project will also create economic opportunities by reducing air pollution and carbon footprints.

First look of RRTS (Regional Rapid Transit System) train was unveiled today. It will be first of its kind in India with a design speed of 180 kmph. The prototype is scheduled to roll off the production line in 2022: Ministry of Housing & Urban Affairs #Delhi pic.twitter.com/utIqUIdraS

The NCRTC, a joint sector company of Central government and states of Delhi, Haryana, Rajasthan and Uttar Pradesh, is mandated to implement the RRTS project across the national capital region, ensuring a balanced and sustainable urban development through better connectivity and access.

According to NCRTC officials, the corridor will have 24 stations and the trains will reduce travel time from Delhi to Meerut to 55 minutes and daily expected ridership is eight lakh passengers. The other two corridors in the phase-I of the project are Delhi-Gurugram-Alwar and Delhi-Panipat.

(The above story first appeared on LatestLY on Sep 25, 2020 07:37 PM IST. For more news and updates on politics, world, sports, entertainment and lifestyle, log on to our website latestly.com).