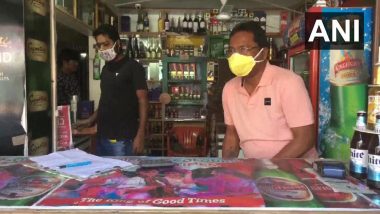 New Delhi, August 7: The Delhi government allowed liquor shops in the national capital to remain open from 10 am to 10 pm with immediate effect till further orders. The Excise Department extended the one hour time from its earlier 10 am to 9 pm timings  According to reports, the move will help in increasing the government's revenue.

The Arvind Kejriwal-led government in Delhi had imposed a 'special corona fee' of 70 percent on MRP on all categories of liquor sold through retail licensees for consumption ‘off the premises’ from May 5 a day after the liquor shops opened amid the coronavirus pandemic. Delhi Liquor Prices: Alcohol Turns Cheaper in National Capital From Today as AAP Government Removes 70% Corona Cess, VAT Increased.

However, the fee was waived off in early June and the prices of the alcohol again came down. The objective behind Kejriwal to impose the corona fee was to avoid overcrowding in liquor shops.

All liquor shops in Delhi are allowed to open from 10 am to 10 pm instead of 10 am to 9 pm, with immediate effect till further orders: Excise Department, Delhi Government

(The above story first appeared on LatestLY on Aug 07, 2020 01:21 PM IST. For more news and updates on politics, world, sports, entertainment and lifestyle, log on to our website latestly.com).