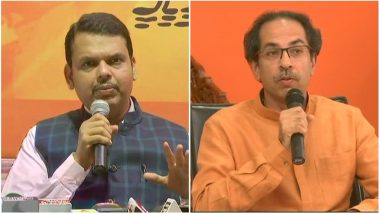 Mumbai, June 13: Leader of Opposition Devendra Fadnavis on Sunday met Maharashtra Chief Minister Uddhav Thackeray to discuss the relief measures announced by state government for those devastated by Cyclone Nisarga. Fadnavis was accompanied by a delegation during his meeting with the CM, which took place at the Balasaheb Thackeray Memorial. 'Uddhav Thackeray Can't be Blamed': NCP After Rahul Gandhi's Comment on Maharashtra's COVID-19 Spike.

Cyclone Nisarga had ravaged parts of Konkan or the coastal belt of Maharashtra, with several hectares of farmlands including mango tree farms being devastated in Ragad and Solapur districts.

The meeting lasted for few minutes, where both leaders claimed to have discussed only issues related to the devastation caused by the cyclonic storm on June 3. Following their discussion, Fadnavis told reporters that he appealed Thackeray to take into account the various losses faced by farmers in the region.

Apart from compensating them as per the acres of their farmland, it should also be considered that those fruit growers who have lost their trees would require upto 10 years to regrow them. "These concerns should be taken into account," he said.

Mumbai: A delegation led by LoP Devendra Fadnavis meets CM Uddhav Thackeray to handover the memorandum seeking assistance for the people affected in the Konkan region due to #CycloneNisarga. https://t.co/RYjM0U9mRR pic.twitter.com/Hzb0Y7YQNv

The Fadnavis-Thackeray meeting also assumes significance as it comes days after the reported fissures in the Congress-NCP-Shiv Sena alliance that is ruling the government in Maharashtra. The Maha Vikas Aghadi, as the coalition is called, has alleged that the BJP is making unsuccessful attempts to woo their legislators.

The BJP has denied the charge of making any attempt to destabilise the government. But the party has reiterated that the coalition government would not last long and fall due to its own fissures.

(The above story first appeared on LatestLY on Jun 13, 2020 06:34 PM IST. For more news and updates on politics, world, sports, entertainment and lifestyle, log on to our website latestly.com).