A Deputy Superintendent of Police (DSP) rank officer, who requested financial assistance from the Punjab government for lung transplant after contracting coronavirus (COVID-19), has died. 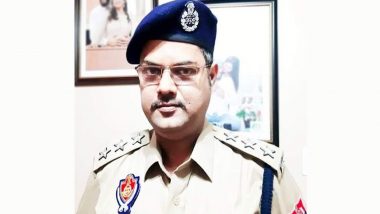 Ludhiana, June 10: A Deputy Superintendent of Police (DSP) rank officer, who requested financial assistance from the Punjab government for lung transplant after contracting coronavirus (COVID-19), has died. DSP Harjinder Singh breathed his last SPS Apollo Hospital in Ludhiana on Wednesday. According to his friend Harry Sharma, the Punjab government could not arrange funds for the cop's lung transplant. Punjab CM Amarinder Singh Checks on ASI Harjeet Singh's Health Via Video Call Day After His Hand Was Chopped Off in Attack by Nihangs.

DSP Harjinder Singh's both lungs were damaged due to COVID-19 infection. Recently, he had made a video from the hospital bed and urged the Punjab government to arrange funds and means for the lung transplant. "Fund my treatment and give me a chance to live, instead of giving compensation after my death," the officer had said in the heart-wrenching video while gasping for breath. Punjab Hooch Tragedy: CM Captain Amarinder Singh Suspends 7 Excise Officials, Announces Ex-Gratia of Rs 2 Lakh Each For Kin of Deceased.

He had added that the government may give a job to a family member after his death. "But I have a chance to survive if I get a lung transplant immediately. I can take care of my family on my own," he had said. Punjab Director General of Police (DGP) Dinkar Gupta on June 2 tweeted that Chief Minister Captain Amarinder Singh had agreed to support the treatment of DSP Harjinder Singh "after his recovery from COVID-19".

"All expenses on his treatment so far have also been borne by Punjab government and Punjab police," the DGP said. According to a report by The Tribune India, CM Amarinder Singh released some funds from his discretionary quota and Ludhiana Police Commissioner Rakesh Aggarwal made sure free treatment for DSP Harjinder Singh at the hospital.

Reacting to DSP Harjinder Singh's death, the Chief Minister tweeted: "Deeply saddened to learn that our valiant DSP Harjinder Singh, despite best medical efforts, lost the battle against Post-Covid illness. We stand by his family in their hour of grief and will do everything to support them. My heartfelt condolences. RIP!"

(The above story first appeared on LatestLY on Jun 10, 2021 12:51 PM IST. For more news and updates on politics, world, sports, entertainment and lifestyle, log on to our website latestly.com).