According to the NIA, these terror operatives use the porous Bangladesh border to enter the country. The alert issued by the state home department asked Durga puja organisers to set up systems to monitor crowd movement. They have been asked to install CCTV cameras and watch towers in the vicinity of puja pandals and work in close coordination with the local police station. 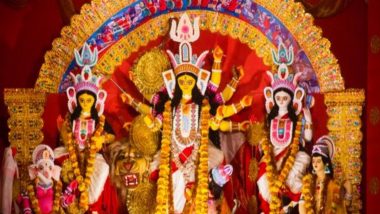 Kolkata, October 10: The state government has sounded a terror alert in the state during the 'pujas' -- an indication that West Bengal is the new terror target. Though senior police officers are yet to jump to any conclusion, arrests made by the National Investigation Agency (NIA) and the Kolkata Special Task Force (STF) in the last few months show the movement of terror modules in the state.

According to the NIA, these terror operatives use the porous Bangladesh border to enter the country. The alert issued by the state home department asked Durga puja organisers to set up systems to monitor crowd movement. They have been asked to install CCTV cameras and watch towers in the vicinity of puja pandals and work in close coordination with the local police station.

The notice also mentioned that immersion of all idols have to be completed between October 15 (Dashami) and October 18 in consultation with local police stations. "In the context of the prevailing threats from divisive and terrorist groups to destabilise the country and to create law-and-order problems, you are advised to exercise utmost vigilance during the celebration of the festivals," the statement read. Delhi Police on High Alert After Receiving Input on Terror Attack During Festive Season.

It further suggested, "The community puja organizers should be asked to engage adequate numbers of volunteers in Puja pandals to keep vigil on the movement of suspicious persons and all the volunteers should be directed to keep in touch with local police constantly."

The NIA arrested Aal Halif alias Abu Ibrahim -- one of the most dreaded IS handlers in this subcontinent from Bengaluru in 2020. This IS handler was a meritorious student of economics before his entry into the terror world. Halif disguised as Sujit Chandra Debnath was working as an assistant of a mason in Bengaluru.

Similarly, Kolkata STF -- the elite Kolkata Police force arrested three JMB handlers -- Naziur Rahman Pavel, Mikail Khan and Rabiul Islam -- who sneaked into the India and were residing in the posh residential area of the city.

To avoid detection, Pavel used the Hindu name Jayram Bepari. He and Mekail Khan alias Sheikh Sabbir befriended two Hindu women in the Haridevpur area and had planned to get married. This would have helped them recruit more people without arousing suspicion.

These are not isolated examples but there are several other instances when the terror handlers have been using religion as a tool to fox the investigators. "Religion is no more a taboo for the terror groups rather they are using it as a tool to hide their identity. Changing religion is no more an important thing for these handlers rather they are using it effectively to dodge surveillance," a senior Kolkata Special Task Force Officer (STF) said. Durga Puja Pandal Designed on 'Khela Hobe' Theme in Kolkata to Motivate Children, Youth to Play Outdoor Games.

Another factor that is keeping the police and the investigation agencies on the tenterhooks is the lockdown and the subsequent unemployment which is making the work of these terror groups easier. Taking advantage of the porous border with Bangladesh and unemployment, international terror groups like JMB, Ansarullah Faction and even Islamic State are trying to spread their network in the state. The aim is to make West Bengal, the headquarters of the terror activities in entire eastern India.

Sometimes through direct interaction and at times through online, they are targeting brainy but unemployed young boys and girls in the state. The National Investigation Agency (NIA) and the Special Task Force (STF) of the Kolkata Police have secured this information from the three JMB terrorists who were arrested by the STF sleuths recently from a colony in the southern outskirts of Kolkata. The investigation officials are worried that because of systematic brainwashing by these terror groups many meritorious but unemployed youths are getting lost from mainstream society.

(The above story first appeared on LatestLY on Oct 10, 2021 11:51 AM IST. For more news and updates on politics, world, sports, entertainment and lifestyle, log on to our website latestly.com).